Mount Miguel junior's uncle introduced her to the game when she was 11. 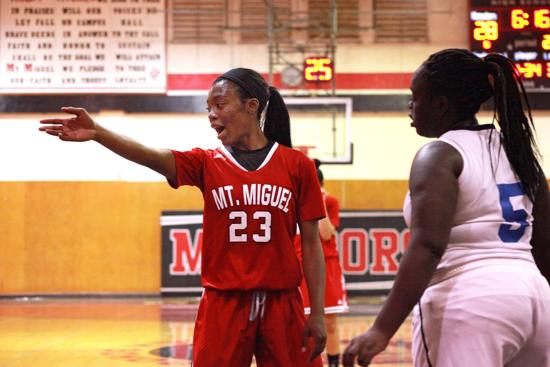 Mount Miguel point guard Zaria Branch is described by her coach as a quiet leader on the floor.

SPRING VALLEY — When Zaria Branch was 11, her uncle, Tristan Lamb, suggested that sitting around doing nothing wasn’t the best way to use her time.

Being a former All-League basketball player at El Cajon Valley High, he offered to help her learn and they went to a nearby park to shoot around a little and see what she thought of the sport.

“I liked it, but I was not an instant success,” says Branch, a junior point guard on the section-ranked Mount Miguel girls’ basketball team. “I had never played before, I’d just kind of run around the court. Every day after school, my uncle helped me but it took time.

“Once I got it, though, I got it. I’d watch the Lakers and players like Kyrie Irving.”

Lamb says you can’t help but notice the improvement.

“As soon as we went out there, she loved it,” Lamb said. “She is naturally athletic and aggressive and the first area in which she caught on and became a good player was on defense.

“I had a feeling she’d be pretty good. Before basketball the only sport she watched was boxing, but once she started playing she became obsessed with getting better, with becoming the best. We still play one-on-one.”

The two sides disagree who wins those matches these days.

Through the first four games of the season — all wins — the 5-7½ junior is averaging 18 points a game with a high of 34 in the opener. As a point guard she also averaged 3.5 assists and 3 steals a game.

Her success has come while living with her grandmother, older brother and nephew. She said her father died when she was 6 years old and barely remembers him. He mother lives nearby but is not part of her everyday life.

“It has just made me grateful for what I have,” said the 16-year-old who maintains a glittering 3.8 GPA and is planning to attend college. “I appreciate what others have done for me.”

That said, her coach, Robbie Sandoval, says there isn’t another player he’d trust more with the ball than Branch. Although he has had numerous Division I players, he doesn’t hesitate to say Branch is his best all-around point guard.

“This is her third year and she’s grown up without her parents,” said Sandoval, noting that her aunt and uncle have been a steadying influence. “She is humble and what makes her really good is she can do a little bit of everything.

“At 5-7½, she can jump with the best of players. She can shoot, defend, pass the ball and excels at handling it. She’ll play the point or the 2 guard in college”

What Sandoval appreciates most is Branch’s attitude.

“She’s all about the team, not herself,” said the veteran coach. “She passes a lot and plays with this quiet confidence that’s hard to describe. She is the most athletic guard I’ve had but don’t let that quiet demeanor fool you — she’s competitive.”

An upset loss in the section quarterfinals last year still rubs her the wrong way.

“It felt depressing,” Branch said. “Right away we determined we would bounce back this year, that we can use that loss to motivate us this year. Personally, it was not one of my best performances but most of all, I had too many fouls.

“That won’t happen this year.”

With the first six players returning plus two freshmen who contribute, the Matadors figure to be one of the best teams in the new Open division.

Especially with Branch running the show at point guard.