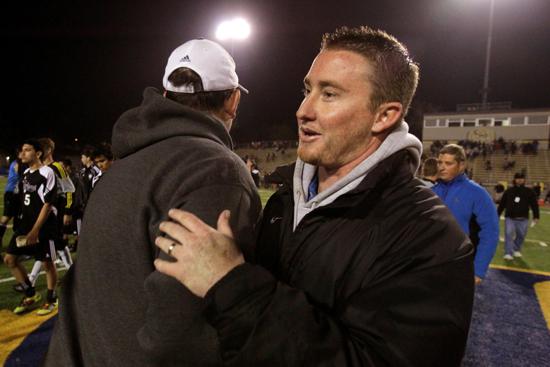 San Pasqual soccer coach John Burson said the Eagles have improved, but "this (loss) also shows there is also a lot of work to be done."

Oceanside — It took playing the elite teams in the 19th annual Southern California Classic tournament to kick-start the season for the San Pasqual boys soccer team.

The Eagles, coming off a San Diego Section championship campaign, opened their schedule with mixed results before reaching the tournament final for the third time in four years.

In the Showcase West title match, though, the Eagles couldn’t overcome unbeaten San Clemente in falling 3-1 on Monday at Oceanside High.

Senior Eric Ledesma scored a tying first-half goal for San Pasqual (5-3-2). But the Tritons (11-0-1) responded to avenge a loss to the Eagles in the final two years ago as senior Bryce Kaminski finished with a hat trick for a team-high 13 goals on the season.

“Then, when we started the tournament, we started getting our way of play. It’s just going to get better after this.”

As a SoCal Classic highlight, the Eagles recorded a 6-1 semifinal victory over St. Augustine on Saturday. In the first four tourney games, senior Wayde Scibilia had two hat tricks and eight goals overall for 10 on the season.

“Overall, the tournament was encouraging,” San Pasqual coach John Burson said. “The guys started having fun and working for each other, finding our form. But this (loss) also shows there is also a lot of work to be done.”

Eagles goalkeeper Aron Herrera made six of his eight saves in the second half.