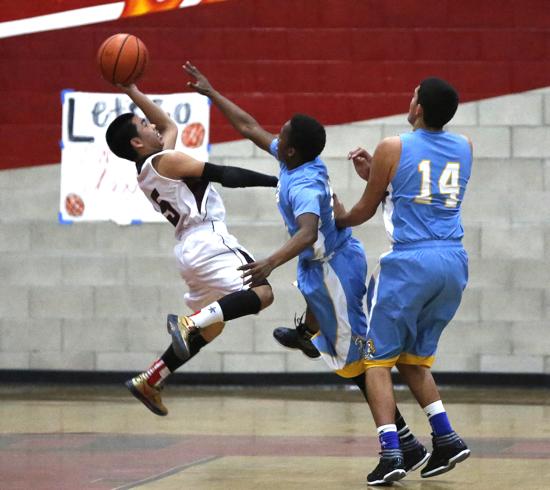 At halftime of a matchup between Morse and Hoover, the No. 10 Cardinals trailed by 15 points. Morse stymied Hoover’s offense, holding them to 18 total points while pouring in 33 themselves.

In another matchup, Poway stumbled early against Escondido. Then, the Titans scored 42 points in the fourth quarter, erased a 13-point deficit with a minute left and hit a 3-pointer to push it into an extra period.

“We call that situation ‘home run’ and we practice it all the time,” said McCarthy, who finished with 20 points. “And it doesn’t always end that way.”

That was the appetizer.

Today, the entrée arrives — a slate of quality basketball matchups held at two locations in the county on Martin Luther King Jr. Day.

Traditionally, Hoover hosts the MLK showcase, however, this season, the tournament, run by former Cardinals coach Ollie Goulston, has been moved to the North county, fielding competition at El Camino high school in Oceanside.

The 5-foot-9 junior guard, who is averaging 28.7 points and 7.1 assists per game, has poured in 30 or more seven times this season and dished out double-digit assists in his last three outings.

A weekend ago, the Wildcats, led by All-Section guard Devin Watson, trailed Marantha by 17 points at halftime of the Los Angeles-San Diego Challenge before erasing the deficit and sprinting past by 13 points.

In Mission Valley, four of the Top 6 ranked teams clash in a MLK Exhibition doubleheader at Francis Parker.

The No. 6, host Lancers (15-2), who yield two blemishes by a combined tally of two points, challenge the No. 4 ranked Torrey Pines Falcons (14-3), who lost on McCarthy’s buzzer beater.

The Mavericks sport two losses by a combined margin of four points while the Saints’ two defeats come by nationally-ranked California opponents.

Pick either site. Pick any game. You can’t go wrong. Kick back, relax and enjoy the show as some of San Diego’s finest basketball squads honor Martin Luther King Jr.