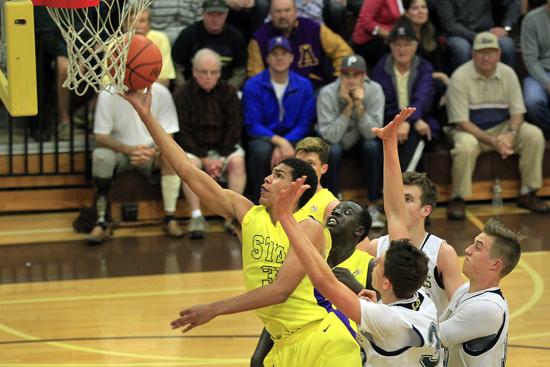 St. Augustine senior Trey Kell, who will attend San Diego State, goes for a layup to score two of his 37 points.

The SDSU commit, who tallied 37 points and five assists, burned La Costa Canyon, nailing six free throws along with three jumpers to weather the Mavericks’ late surge as the Saints won 79-74 in the MLK Invitational on Monday at Francis Parker School.

It was the second victory against a Top 10 opponent this season for the No. 1-ranked Saints (17-2).

“I like to have the ball in my hands as the primary decision-maker when the game is close,” Kell said.

“Sometimes they back up, sometimes they press on, so I either attack, pull up or look for my teammates, who hit some big shots for us.”

Eleven turnovers plagued No. 3 La Costa Canyon (16-3), snowballing into a 42-32 deficit entering the third quarter. By the 5:36 mark in the final period, the Mavericks had chiseled into the cushion.

The Mavericks, who erased a lead against Torrey Pines before collecting a 54-52 victory on McCarthy’s 3-point buzzer beater on Friday, would inch no closer.

“Out of timeouts, down two, we thought we had a great possession, but got unlucky,” said La Costa Canyon coach David Cassaw.

“They hit some tough shots that increased their lead, which was a pivotal moment in the game. Give them credit.”

To open the MLK Invitational, No. 4 Torrey Pines eased past No. 8 Francis Parker, defeating the Lancers 62-51.

It was the Falcons’ first victory against a Top 10 opponent in three attempts this season.

At halftime, Torrey Pines held a 33-23 cushion and pushed that to as many as 22 points in the opening minutes of the fourth quarter before Parker cut some of the deficit.

Senior forward Evan Fitzner scored a game-high 19 points for the Lancers while sophomore guard Brandon Cyrus led the Falcons with 14.