Contributions go beyond the box score 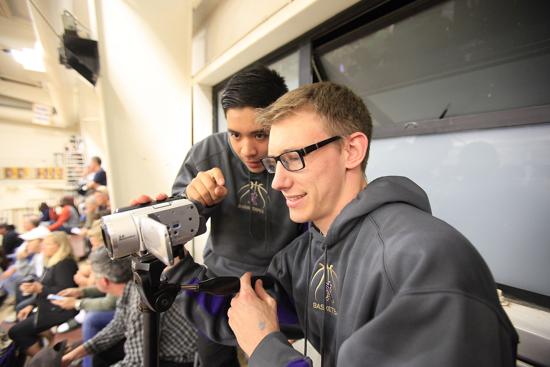 Thomas Yourg, team manager for St. Augustine basketball (right), works with Desi Charfauros to set up a video camera before a Saints game.

Yourg, who was born about three months premature, weighed 2 pounds at birth. He was born with mild cerebral palsy and needed multiple brain surgeries after suffering several mini-strokes. When Yourg was a baby, his heart once stopped beating for 20 minutes.

“We didn’t know if he would ever be able to play sports,” said Virginia Yourg, Thomas’ mother. “He has always been determined, had a great work ethic, and has certainly proved us wrong.”

When his duties as basketball team manager end, Yourg will participate in track and field for St. Augustine in the spring.

“Although I can’t do a lot of what others my age can, I continue to have a good attitude and make the most of the life that God gave me,” he said.

Yourg’s passion for sports stems from a childhood filled with shadowing his father, Dan Yourg, associate director of athletics for business affairs at USD.

“I have always been around sports, and that has fueled my love,” he said.

Since fifth grade, Yourg has dreamed of attending St. Augustine. His mother recalled a time when her 10-year-old son told coach Mike Haupt that he would be playing basketball for the Saints someday.

That goal proved to be unrealistic, but Yourg has overcome the odds to become a part-time student at St. Augustine. He takes four classes — English, religion, science and art — and spends time each day with a tutor who helps him with homework and memory retention.

Though it’s not what Yourg originally envisioned, his role as manager has allowed him to become part of a team.

“I grew to accept myself,” Yourg said. “I’m not a great athlete or basketball player, but I still wanted to help the team in any way I could.”

Haupt said he applauds Yourg’s contributions to the Saints, who are ranked No. 1 in the San Diego Section.

“He is a great young man with a true love for basketball,” said Haupt, in his 18th year as St. Augustine coach. ”He helps daily and brings a great energy and enthusiasm to our team.”

Yourg sees Haupt as more than a coach.

“He is like a second father to me and I admire the values that he instills in his players,” Yourg said. “He preaches integrity, respect, and demands hard work out of each guy.”

Yourg’s managerial duties include setting up before and cleaning up after practices and games, scorekeeping, tracking individual and team stats, taping games and even taking notes during practices for the coaches.

“Everyone makes me feel like a teammate,” he said.

Yourg shares a special bond with some of the players, none more than sophomore Daniel Lara, who often stays after practice and coaches Yourg on basketball skills.

“The fact that he wants to spend time with me is special,” Yourg said.

“We both share the same love for basketball,” said Lara, who played for the 16-and-under Mexican National basketball team this summer in Uruguay. “I wanted to help him out with his game.”

Yourg never seems to let an opportunity pass to be thankful for his work with a storied Saints basketball program that has won multiple championships.