Orange Glen basketball back on the map 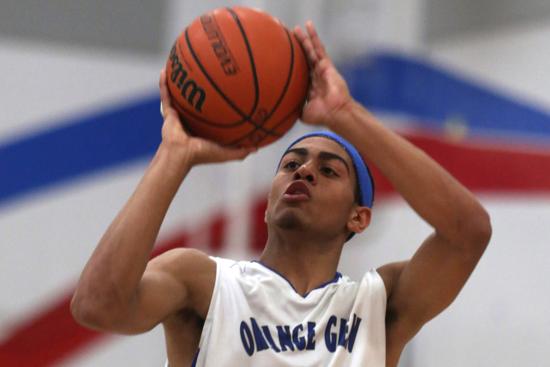 Orange Glen freshman Michael Diaz is averaging 10.6 points and 6.5 rebounds a game and has 60 assists and 50 steals.

ESCONDIDO — There was no bigger home-court advantage in San Diego County than Orange Glen High.

The boys basketball team was winning championships, the gym was jammed, the students were loud and creative with their cheers and the shirtless boys painted their chests.

That, however, was 14 seasons ago when John Masnica and Isaiah Orange led the Patriots to the San Diego Section Division II title.

But there is a basketball revival at Orange Glen this season.

The Patriots are 15-4, have a chance to win the Valley League championship and should be among the top seeds in the Division IV playoffs.

The OG students have taken notice. While the crowds aren’t anything like the 1998-99 championship season, they’re a far cry from the couldn’t-pay-me-to-go-to-a-game days of the 0-25 season of 2006-07.

“Finally, we’ve got something going,” said Chris Featherly, who is in his fifth year as head coach of the Patriots, going 23-68 in his first four seasons.

In Escondido, ninth-graders can choose to enroll at Escondido, San Pasqual or OG.

Freshman twins Michael and Devin Diaz live a block from Orange Glen. Michael is averaging 10.6 points and 6.5 rebounds a game and has 60 assists and 50 steals.

“My job is to use my athleticism, get people involved in the offense,” Michael said. “We have people talking. The students are getting more involved, and it’s fun.”

Devin Diaz is averaging 9.6 points and has 30 3-pointers.

“People wondered if freshmen could get it done,” Devin said. “We’re showing we can. We’re getting better, and we’re going to stay together.

Freshman Trevor Owens is averaging 8.6 points and has 25 3-pointers.

“We heard about the great tradition OG had,” Owens said. “A lot of us play for Coach Featherly on the Coastal Elite club.

“We wanted to stay together. We knew OG hasn’t been very good, but we want to get it going again. Our goal is a CIF championship.”

Gabe Macias is the fourth freshmen on the team. A skilled 6-foot-3 player, he could stretch out to 6-7.

A dislocated kneecap before the season in an open-gym session has kept him on the sidelines. He’s expected to play his first game this week.

“It was painful when I did it, and the recovery has taken a lot longer than I thought,” Macias said. “I’m watching my teammates win, and I can’t wait to get out there and help them. I think I can help us in the post. I’m a good passer and have a good midrange jumper.”

The team isn’t all freshmen, though.

“It has been pretty rough here,” said Hoskins, who also has endured three losing seasons in football. “These freshmen have brought some life to the program. Finally, we have some basketball players.

“We’ve always played good defense, but now we have some scorers. We’re playing together, not as individuals. Honestly, it’s fun to win.”

“This winning thing is fun,” Rocha said. “I played travel ball with the freshmen, and I think that has helped build some chemistry.”

Some wondered how Escondido High transfer Kayln Thomas would affect the team’s chemistry. A talented player, he wasn’t a good fit on the Escondido team, and was asked to leave the Cougars. Thomas has played three games since he become eligible earlier this month and is averaging 21 points.

“Coming here has been a good experience,” Thomas said. “These guys are my family now. Sitting out, waiting to get eligible, helped me refocus. I have a new viewpoint on the game now, and it has been pretty cool.

“This team has good chemistry. We eat lunch together. We crack jokes. Honestly, it has been way better than I had planned.”

Part of the plan for success was the schedule.

Instead, the Patriots have a more realistic schedule with wins over Mar Vista, Castle Park, Fallbrook, Tri-City Christian, Chaparral and Escondido Charter among others.

The losses are to Bishop’s, El Cajon Valley, Sunnyvale King’s Academy and Del Norte, all of which have winning records.

“There is nothing easy about this league,” Featherly said. “But these kids are hungry. They’re focused. Finally, we have something going here.”