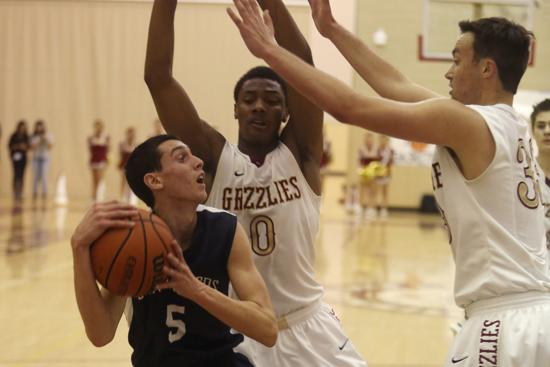 SAN MARCOS — At full strength for the first time in weeks, San Marcos High overcame a seven-point deficit midway through the fourth quarter and edged crosstown rival Mission Hills 47-43 Friday night before a roaring, standing-room-only crowd in the Grizzlies’ gym.

Two of the No. 10-ranked Knights’ wounded — Ben Perez and Marc Pacia — led the way in the Avocado East League game.

Perez, who has missed several games with concussions, scored 11 points — six in the fourth quarter.

“This is only my second game back,” Perez said. “The first game back against Escondido, I didn’t have my legs, and I was forcing stuff.

“It has been tough without everyone healthy, but I think we’re ready to step it up now.”

Pacia was playing his first game after missing nearly a month with an ankle injury. The Knights guard finished with six points, four of those came on free throws in the final hectic minutes.

“I didn’t play a lot last year against Mission Hills, but I was taking mental notes on how loud it was,” said Pacia, who left the game in the final seconds with leg cramps.

“I was ready for the noise and the pressure. We always say free throws win games.”

The Grizzlies took the lead back on a pair of free throws by Jean-Luc Williams, but three turnovers in the final 2:01 doomed Mission Hills.

“We didn’t handle the heat very well,” said Grizzlies coach Curtis Hofmeister. “We played good defense, but we didn’t do enough on offense.

“Having Pacia back — his offense and the pressure he brings on defense — was big for them. He’s the head of the snake.”

“We’ve been without someone for seven or eight games,” said San Marcos coach Dante Carey. “It’s good to have everyone back, but especially Pacia. He’s our leader. He brings emotion.”

“This is a great rivalry,” Carey said. “Both teams, all the coaches, are very competitive. It’s a really big deal to the kids to win because it means so much in the city.”