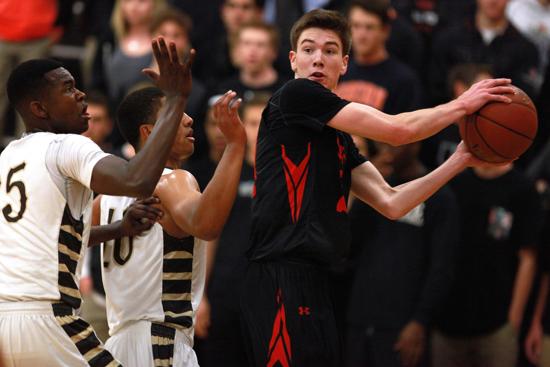 Santa Fe Christian senior Brian Finley is averaging 20 points and 10 rebounds a game for the Eagles.

“We have 15 guards,” Bickley said. “At times, because we’re playing a point guard at the center position, we have to double down when facing a team with a big. It leaves us susceptible to open looks on the floor.”

The undersized Eagles have bowed to lengthier Coastal League opponents Francis Parker and Army-Navy, both of whom attack with 6-9 forwards.

When SFC’s Grant Corsi departed to Biola University, the 6-6, All-Coastal League selection’s absence left a sizable hole in the attack. Corsi, who poured in 23 consecutive points against Army-Navy in the semifinals, averaged 21 points and 11 rebounds per contest.

That paved the way for 6-4 senior guard Brian Finley.

“He’s the focal point,” Bickley said. “And when you’re guarded by the team’s best defender night in and night out, and still able to score 20 per night, that’s special. To me, that’s the sign of a great shooter and a great player.”

The offense isn’t exclusively tailored to Finley. However, most of the Eagles’ sets involve the 3-point specialist.

“I can be a little shot-happy,” Finley said. “If I see one going in, I continue to put them up to develop a rhythm. It’s what I’m comfortable doing, although I like to go inside and get to the free throw line to get my shot going at times.”

So far, Finley has tallied 84 3-pointers — nine more than last season’s total. And his 3-point ability helps create shots for junior Jack Langborg and senior Cole Needham and opens up the floor for penetration to the basket.

Despite a 2-4 mark in the Coastal League, Santa Fe Christian is 14-9 overall and still in position to clinch a San Diego Section playoff spot — this year in Division II.

“We may not have much size, but we don’t let that stop us from competing,” said Finley, who has communicated with the service academies and a few small schools about playing college basketball. “We can hit a lot of shots and cause problems for teams.”