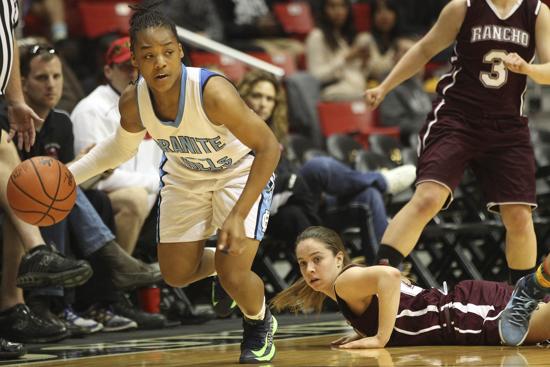 Granite Hills' Deajanae Harvey (shown in a game last season) hit the winning basket in the Eagles' triumph over Helix on Friday night.

LA MESA — The party was scheduled to begin as soon as the final buzzer sounded.

It never happened because the Grossmont Hills League championship in girls basketball remains in doubt.

Junior Deajanae Harvey’s steal and layup with 28 seconds to play gave Granite Hills High the lead for good en route to a 64-63 victory over Helix on Friday, snapping the Highlanders’ 12-game winning streak.

Granite Hills, the reigning San Diego Section Division I champion, tempted fate a few times in the fourth quarter, losing the lead at 56-53 on Bree Shepard’s 3-pointer with 3:19 left before getting a 3-pointer from sophomore Micayela Hernandez, who scored nine points, and a layup from freshman Anabel Rodriguez, who also scored nine points, for a 58-56 lead.

Helix scored the next five points, then the teams traded points before a basket by Eagles sophomore Emma Kubari set the stage for Harvey’s steal and layup.

“There were three or four times in that last quarter where I thought we would lose to them again,” said Harvey, who scored 24 points. “Our younger players stepped up this time and we wanted to show them that we deserve to be in this spot.

“We had to find some mental focus for this one. Our younger players weren’t ready for Helix. This time we were.

“I knew we’d give them a better game than last time.”

But it was the Eagles who called off the Highlanders’ celebration.