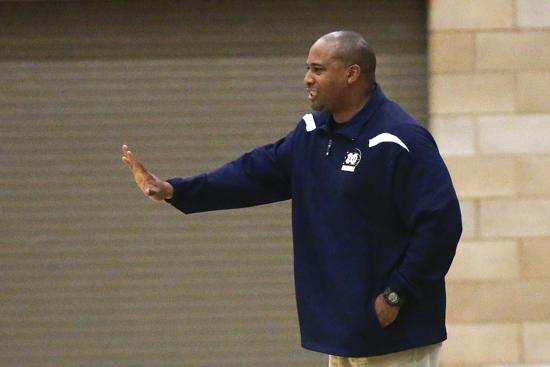 Mater Dei Catholic coach Kenny Caesar has the Crusaders headed to the playoffs for the fifth straight season.

His unorthodox path to Mater Dei Catholic High has been bricked with an eclectic mix of international, collegiate and professional cobblestones for fifth-year coach Kenny Caesar.

The San Diego native, who graduated from Patrick Henry High and Cal Lutheran University, ventured overseas and across the U.S. before settling in as Crusaders head honcho.

Caesar, 43, laughed as he reflected on his route to Chula Vista, days before No. 2-ranked Mater Dei (24-2) will suit up for a fifth consecutive trip to the boys basketball playoffs.

It’s been a roller-coaster journey, twisting and turning unexpectedly. But the once-nomadic coach has finally found a home with the Crusaders.

“When I first started, it wasn’t much of a basketball place. Kids played soccer,” Caesar said. “But I was able to start something and see it grow into a very competitive program in basketball. People have bought in and it snowballed.”

Before arriving at Mater Dei, Caesar twice strayed from the high school game.

In 2000, years removed from a one-year professional basketball stint in Australia and a graduate assistant position with Cal Lutheran, Caesar departed for the music entertainment business.

“I pull up to this house in (Los Angeles). There are eight people sitting at the table and they have pictures of girls all over the wall, so I thought they wanted me to coach basketball,” Caesar said, laughing. “They’re asking me questions: What’s your philosophy of discipline, blah, blah, blah? One lady gets up and says I like him. Let’s hire him. Arista Records sends me on a plane to Orlando the next day and the next thing you know, I’m on a tour bus and on planes, etc.”

Caesar had accepted a tutoring position with Arista, traveling the world as the primary educator for Puff Daddy’s teenage girl group Dream, whose members performed alongside ’N Sync on the No Strings Attached Tour.

It lasted a year.

“What I wanted to see was if he cared about young people and their development on and off the court,” Haupt said. “With Kenny, that was obvious. Plus, he had a high level of basketball knowledge as a former player.”

Life was good for Caesar. He had direction and purpose.

Then the phone rang.

It was Mike Brown — his old Mesa College basketball teammate and roommate — soliciting his services for the LeBron James-led Cleveland Cavaliers in 2006.

The job entailed the day-to-day grind of the NBA: breaking down film, rebounding shooting sessions for players, guarding post-ups, teaching technique and other miscellaneous tasks.

If Brown, the head coach, needed clips of Cavs center Anderson Varejao posting up solely on the right block, Caesar spliced and presented the tape.

“When you have a chance to get a shot at a college or NBA job, people say it’s gotta be better,” Haupt said. “Depending on what you want out of your life and career, it may be, but Kenny found it wasn’t better for him.”

The NBA pastures were greener but contained more weeds.

“Walking away from that was just walking away from another team, because at that level you’re dealing with agents, players, attitudes and egos,” Caesar said. “It’s just a giant AAU team.”

Piecing together notes from previous destinations and his first head coaching job — two seasons at Coronado High from 2007 to 2009 — Caesar has forged a vision for Mater Dei centered on hard work, a family atmosphere and meticulous preparation.

From 2004 to 2009, the Crusaders were 51-70 with zero league titles. In the five seasons since, the program has gone 84-57 with two Mesa League crowns under Caesar, who teaches public speaking at Mater Dei.