San Pasqual tuning up for run at title 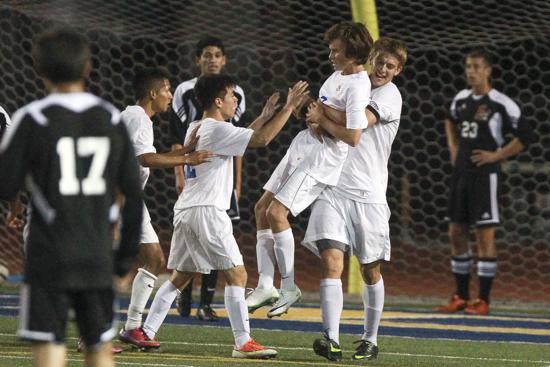 ESCONDIDO — As a freshman called up to the varsity for the playoffs, Eric Iloski watched from the bench as the San Pasqual High boys soccer team won the San Diego Section Division I championship last season.

Now Iloski is poised to help the Eagles go for another crown in the new Open Division.

With his tying goal with only seconds left in the first half, Iloski enabled host San Pasqual to tie crosstown rival Escondido 1-1 in the regular-season finale on Thursday. The Eagles head into the postseason with a 13-game unbeaten streak (8-0-5).

“I’m excited,” said Iloski, who recorded his third goal of the season. “I can’t wait for the playoffs. Hopefully, we’ll get another (championship).”

Just before scoring, Iloski was slowed by a hip strain when making a cut on the field. Still, he was in the right place to convert on a rebound off the crossbar.

“I knew time was counting down, but I didn’t know it was that close,” said Iloski, who returned in the second half after getting his hips wrapped. “Once the ref blew the whistle, I was pretty happy.”

The fourth-ranked Eagles (13-3-7, 6-0-2) had already clinched the Avocado East League championship for their fifth consecutive league title before again facing Escondido (9-3-7, 3-1-4). In their first meeting this season, the teams played to a scoreless tie.

“It’s good to end the season against Escondido because it’s always tough playing them no matter how good either team is,” said San Pasqual senior Wayde Scibilia, who has a team-high 23 goals on the season. “That’s going to help in the playoffs because like that, either team can win.”

The Cougars opened the scoring in the 18th minute when Luis Escoto converted a mid-range shot off an assist from Ricardo Gonzales. Elijah Robertson and Diego Zepeda helped key the Escondido defense.

San Pasqual also remained unbeaten over five seasons in the series between the schools (4-0-5).