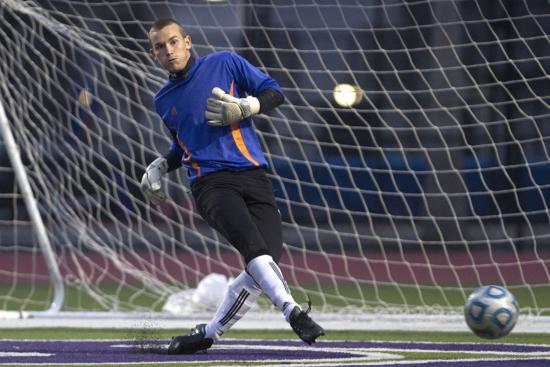 Deemer has faced the Mavericks three times this season with the result being the same each time.

Carlsbad won all three, including Wednesday’s San Diego Section quarterfinal soccer match by a 1-0 score on the Lancers’ field.

The win advances the No. 2-seeded Lancers (18-4-7) to the Open Division semifinals next Wednesday at home against No. 3 San Pasqual.

“Just what you expect from two teams from the same city who have met three times in one season,” Carlsbad coach Jeff Riccitelli said. “We’ve met them in the playoffs six times now and this is only the second time the higher-seeded team has won.”

What was notable about the victory was that Deemer has still not allowed a goal against the Mavs (5-10-7).

Coming on the heels of 3-0 and 2-0 wins during Avocado West League play, the Lancers’ defense was rock-solid through the game’s first 65 minutes before La Costa Canyon managed two golden scoring chances.

Deemer stopped Matthew Parks’ header off a pass from Griffin Theriot with 15:55 left, but the better opportunity came in the final two minutes when Ty Cardinale’s shot off a throw-in was stopped by a diving Deemer.

“A save is a save,” Deemer said shyly. “You never know about LCC because they beat me 5-0 one time so I know they can strike at any time.”

Carlsbad freshman defender Andrew Forth was the only player who did strike it right, scoring with 10:15 left in the first half off Trevor Davis’ corner kick. Cameron Moore assisted on the goal.