Westview aces Helix with a pair of wins 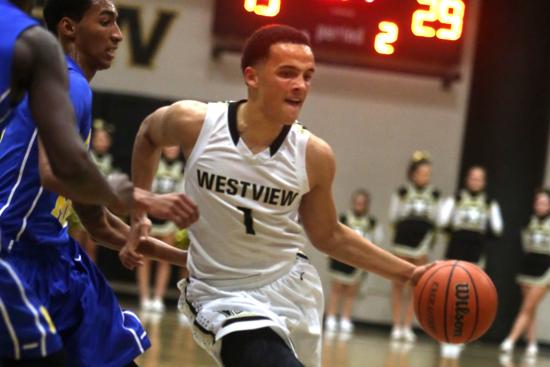 Westview's Marcus Graves (shown in a game earlier this season) scored 24 points to lead the Wolverines past Helix on Wednesday night.

LA MESA — Westview beat Helix in the very first game of the regular season, and on Wednesday the two teams met again to open the San Diego Section Division I boys basketball playoffs.

Westview beat Helix 56-39 in the second encounter, advancing to a quarterfinal matchup against San Marcos thanks to 24 points from senior guard Marcus Graves.

Thomas Knapp added 10 points for Westview (18-10) and Jacob Laundroche scored eight points off the bench as the two combined to score nine straight points in the third quarter to help put the game out of reach.

“Jake and Thomas have been great shooters for us all year,” Graves said. “All of us have confidence in them and they have the green light, and they always hit big shots for us.”

Helix (16-13) looked to be in control early when the Highlanders used an 8-0 run to open a four-point advantage. But that was the last time the Scotties would find any success offensively. Westview, which entered the playoffs with a four-game winning streak, turned up the defensive pressure in the second quarter and it paid off.

The Wolverines scored nine points off turnovers in the second quarter, including two fast-break layups, a steal and a 3-pointer by Graves. Point guard Nathan Cho added a steal and buzzer-beating layup just before halftime to give the visitors a 24-15 lead at the break.

“We knew it would be a physical game because Helix is so big on football and we knew they’d have big bodies,” Knapp said. “We decided to lock down the paint and make them try to beat us with jump shots.”

The defensive plan worked to perfection as the Highlanders, who entered the playoffs with a four-game losing streak, found little success around the rim and even less success shooting from outside.

Senior guard Christian Bell led Helix with 16 points, but the other four starters combined to score only 16.