It's an improbable Tigers’ tale

Morse reaches Division I championship game despite being a No. 12 seed 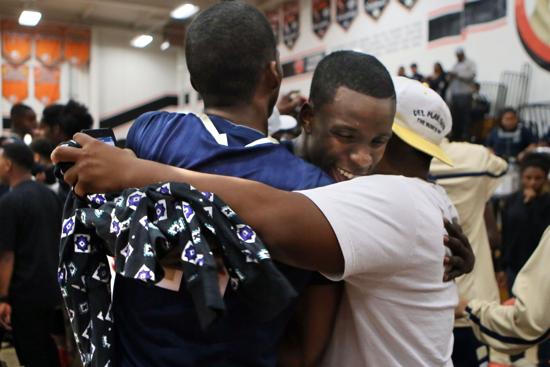 Morse player Jah'mere Mitchell (center) is hugged by teammate Lonzie Belcher (left) and another well-wisher after the Tigers' semifinal win over Escondido.

Seeded 12th in the 16-team bracket, the Tigers won on the road for the second straight game, defeating Escondido 56-49 before a deafening full house Tuesday in the semifinals.

Morse (17-12) moves to the championship game for the first time since 1987, having defeated No. 5 Cathedral Catholic at home, then No. 4 Poway and No. 9 Escondido.

“To win on the road against two good North County teams like Poway and Escondido — well I couldn’t be prouder,” said Morse coach Bob Sumler. “We used that 12 seed as motivation. We wanted to prove everyone wrong.”

The Tigers had the Cougars down by eight before Escondido made it a one-point game at 46-45 with 2:12 to play.

But Escondido (21-9) turned the ball over on three straight possessions and Morse sank 12 fourth-quarter free throws to win the game.

Two of the best young big men in the county — 6-foot-9 freshman Brandon McCoy of Morse and 6-9 sophomore Keegan Cummins of Escondido — squared off.

McCoy finished with 10 points, eight rebounds and seven blocks. Cummins had 11 points, 12 rebounds and two blocks before fouling out with 3:38 to play.

“Those two are going to see each other a lot,” said Sumler, who played on Morse’s 1983 championship team.

“The game was everything I expected. I can’t tell you what it means to me to lead my alma mater back to the championship game. It means so much to my staff and the Morse community”

Dante Foster and Kenny McDonald each had 13 points for Morse.