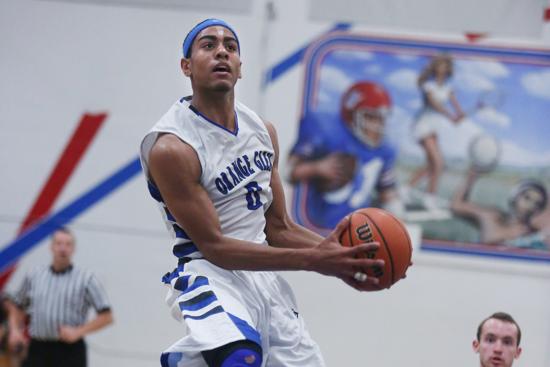 Orange Glen's Michael Diaz (shown in a game earlier this season) had 11 points, 15 rebounds and seven assists in the Patriots' win over Tri-City Christian on Friday.

Down by two points at halftime of the San Diego Section Division IV championship, Orange Glen High coach Chris Featherly had two key words for his Patriots — “focus and defense.”

“We had ants in our pants in the first half,” said OG senior Kalyn Thomas. “We knew what we needed to do. We shocked them with our defense.”

Orange Glen opened the second half with an 11-0 run and went on to beat Tri-City Christian 60-38.

The boys basketball title is the first for Orange Glen (26-5) since taking the Division II title in 1999.

“I told my guys the energy was fine,” Featherly said. “We needed to play better defense, and we needed to hit shots.

“Kalyn came out hot and we played great defense.”

Thomas had a game-high 24 points, 13 of those coming in the third quarter — nine on a trio of 3-pointers.

“The second half matters most,” said Diaz. “We came out really determined.

“This whole experience, the electricity in the building, our students (who had a minimum day at school and packed the south end of USD’s Jenny Craig Pavilion) were amazing.”

Khor Tut, a 6-foot-6 senior, scored just one point for the Patriots, but blocked nine shots and grabbed 11 rebounds.

“Khor was a force inside and Michael Diaz is a stats monster,” Featherly said.

“Thomas making those threes discouraged us,” said TCC coach Stan Bickley. “We allowed their press to get to us at the beginning of the third quarter. Shots we made in the first half didn’t fall in the second.

“We finally ran out of gas.”