Mavericks forward moves to the back for final, but that doesn't keep her from scoring 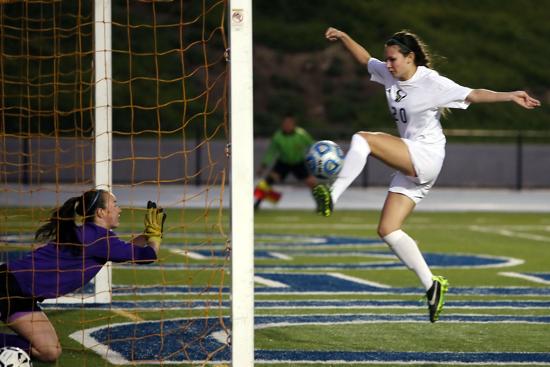 Before the Open Division girls soccer final, La Costa Canyon senior Erika Arkans moved from her usual forward position to back in the field to replace of an ailing teammate.

Still, that didn’t stop Arkans from coming forward and scoring the only goal to lift the third-seeded Mavericks past Westview 1-0 for their second San Diego Section crown in three years at Mesa College on Friday night.

Arkans charged up some 15 yards to convert on a rebound after a header by Genesis Lucero bounced off the crossbar at four minutes into the second half in the fourth straight final between the schools.

“I knew I had to follow up, and I was there to tap it in,” said Arkans, who recorded her 10th goal of the season. “I play very well with Genesis, and she basically made that play. That was one of my best moments.”

“That was just amazing (to score),” Lucero said. “It was a surreal feeling. When it hit the crossbar, I just trusted that Erika would put it in.”

LCC goalkeeper Staci Burland made the last of her four saves on a line-drive shot by Marley Canales with nine minutes left to help seal the victory.

“It was very motivating again playing Westview in the finals,” said Arkans, set to play college soccer at Purdue. “They’re always good competition, so we had to come out fired up.”

Brittney Viboch and Darby Clements alternated by half in goal for Westview per their custom throughout the season. They combined for five saves.

Late in the first half, Burland made a key diving stop on a close-range shot by Gaby Scott off a crossing pass from Canales.