The former Mission Bay running back admits his own mistakes, works toward an NFL career. 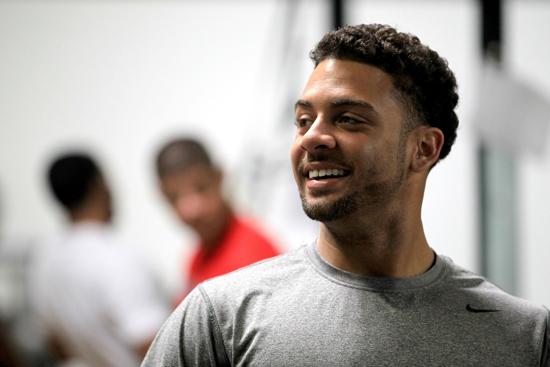 CARLSBAD — Eighteen-year-old Dillon Baxter lounged on yachts, slept in mansions, was flown to Fiji on one day’s notice and whisked to private islands he cannot identify by name — his early enjoyment, he says, at USC.

He admits immaturity. He acted, when he arrived in Los Angeles, like he had arrived. He was suspended his first game, reportedly in part for marijuana use. His classroom attendance was poor.

“I’ve got a lot to prove,” Baxter said. “I’m definitely out to get my name back to where it was.”

Baxter stands today about where, four years ago, the football world expected he’d be. With the draft two months away, the former top San Diego prep prospect is preparing for the NFL. But his road here was divided, from USC to San Diego State to little-known Baker in Kansas. Baxter, a father of a 2-year-old son, seems at ease. He says he’s the player everyone remembers and more mature than the person they last met.

On Tuesday, Baxter will work out for scouts at Kansas State’s pro day. They’ll want to know his story.

He and wide receiver Robert Woods were part of the same recruiting class. Woods, a second-round draft pick in 2013 and now with the Buffalo Bills, recommended in 2010 that Baxter lay low. Ignore distractions. Keep grinding. Once they got to the NFL, everything would come.

“I was like, ‘Everything is already here,’ ” Baxter said.

Baxter had developed a lofty profile. Before USC, he scored 79 offensive touchdowns his senior year at Mission Bay, a single-season state record. He then became a YouTube sensation months before his first college season began; a touchdown run from a spring practice went viral. That’s when, Baxter says, things changed, as affluent students on campus came into contact with him.

“A lot of people don’t know: he and I were friends before he became an agent,” Baxter said. “I didn’t know he took that test to become an agent. But before that, we were friends.”

Egan is the son of entrepreneur Michael Egan. According to Bloomberg Businessweek, Michael Egan’s experience includes founder of Job.Travel LLC and chairman and CEO at Certified Vacations, the latter a privately held company specializing in vacation packages.

Baxter said he was invited on trips.

He recalled one day when Teague Egan told him they were going to Fiji the next day.

That was one trip.

There were many others, too, Baxter said.

“They’d always have everything set up,” he said. “That’s what they’re used to. That’s their life. They go there, and they have a big mansion or something. Teague’s dad has like three houses everywhere. It was different. I felt weird. I’m here, on a boat, Kim Kardashians walking around — not the Kardashian but look-alikes. It was like, ‘This is crazy.’ A little bit different than Mission Bay.”

A USC spokesman said Friday, while unsure if such trips constitute an NCAA violation, “the whole Teague Egan situation was investigated fully here, and there were obvious repercussions.” Attempts to interview Egan on the record were unsuccessful.

Baxter said he regretted the getaways. He hadn’t made it yet. He wasn’t in the NFL. He acted like he was.

“If I could do it all over again, I would take Robert’s advice,” Baxter said. “But you learn.”

If Baxter lived a dream at USC, Baker was the reality check.

The university lies 12 miles south of Lawrence, Kan., but it’s a long way from Kansas and the Big-12 Conference. Fewer than 950 students are enrolled. The 10-acre grounds are so small, Baxter jokes he can hit a golf ball over it. The town, Baldwin City, is no Los Angeles, either. A traffic light on U.S. Highway 56 and Sixth Street is the area’s only.

Baxter wound up here in a hurry.

He was in the coaches’ doghouse at USC, even after Baxter says his behavior changed his sophomore year. On team flights, he had to sit with the Trojans’ medical staff instead of fellow players, Baxter said. He was granted his release and transferred to San Diego State, close to home where his son, Beau Dillon Baxter, was born.

His time on the Mesa was brief.

During an offseason workout, various items, such as money and cellphones, were stolen from the Aztecs’ locker room. Coach Rocky Long questioned Baxter, in the locker room at the believed time of the incident. Baxter said he didn’t steal anything.

“That made my rep worse, from where I came from and now this happening,” Baxter said. “It wasn’t good.”

He left San Diego State after less than two months.

“Baker was definitely humbling,” he said. “I think it was something I needed, though. It made me realize everything I had and everything I missed out on. It was good. It made me work hard, everyone knowing who I was but wondering why I’m here.”

Mike Grossner liked Baxter coming out of Mission Bay. He left the door open for Baxter to play there, although the situation seemed unlikely to materialize. He and his staff worked with Baxter, made sure he was on top of his studies. Baxter completed 16 credits over one summer to become eligible for his senior year.

“If you look at his stats here, it’s nothing outstanding,” Grossner said. “But if you analyze and put a tape on and just watch him, some of the plays he made, you can tell he’s a special player.”

Twenty-two-year-old Baxter has trained for his pro day since January.

The ex-Trojan, ex-Aztec, ex-Wildcat has embraced being back in an NFL-minded atmosphere. He's handled his duties as a father, rushing off recently to the emergency room to care for Beau. When it was determined Beau was OK, he checked in with Prolific’s Strength and Conditioning Director Greg Vandermade to see about fitting in an after-hours session.

Baxter’s preparation includes working out with a receivers coach. He is expected to run the 40-yard dash between 4.4 and 4.5 seconds.

Baxter keeps in touch with Saints receiver Kenny Stills and Cardinals safety Tony Jefferson, two former San Diego prep standouts. Last month, they invited him to Arizona. Stay at a mansion was the offer. Don’t worry about the airfare; it’ll be taken care of.

He is not that 18-year-old anymore.