Westview cashes in before it’s too late 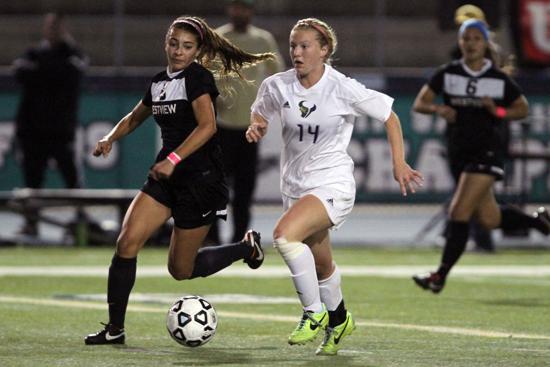 Westview's Marley Canales (left, shown in a game last week) scored the only goal of the match in the Wolverines' win over Granada Hills on Tuesday.

It never reached OT, but it sure looked like it was headed that way.

That is, until senior Hailey Harbison and sophomore Marley Canales combined to score a goal with 11:25 to play, giving the No. 1-seeded Wolverines a 1-0 win over No. 8 Granada Hills in Tuesday’s Southern California Regional Division I quarterfinals.

The host Wolverines (18-8-4) advance to Thursday’s semifinals at home against No. 4 Torrey Pines.

“I don’t care who we play now,” Stogsdill said. “We’ve already played Torrey four times and I know they want a piece of us after we beat them in the section semifinals.”

Not until Canales rifled a shot to the far post past Granada Hills goalkeeper Andreya Ventura was it a certainty that the Wolverines would continue playing.

Westview had seven golden scoring opportunities in the first half and another five before Harbison’s pass found a wide-open Canales on the right side.

“I’m an attacking player so I knew I had to get a goal,” Canales said. “The way the game was going there might not be another chance.”

“I love these kinds of games,” said Canales, who has played for the U-14, U-15 and U-17 national teams. “These are the type games where thrills are made.”