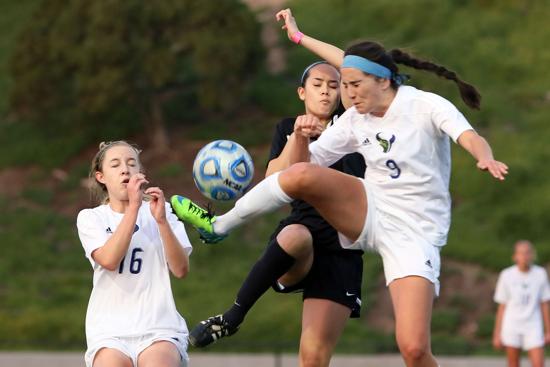 Westview's Angel Meriwether (dark uniform, shown in a game earlier this season) was credited with the winning goal in the Wolverines' victory over Torrey Pines on Thursday.

Both teams got what they wanted — Torrey Pines-Westview V.

It was only fitting that a berth in the Southern California Regional Division I championships was at stake this time.

And the ending was as fitting of the grudge match both teams wanted very badly as it was bizarre.

Senior Angel Meriwether’s flip throw from deep along the Westview sideline hit the hands of Torrey Pines goalkeeper Veronica Romines at the near post and fell into the goal for the winning score in the 2-1 battle Thursday on the top-seeded Wolverines’ field.

“I sure didn’t think that would go in,” Meriwether said. “I was looking to put it in front of the goalie and let someone do something with it.

“When it went in, I couldn’t believe it. All I heard was the crowd screaming.”

Screaming because the win sends the Wolverines (19-8-4) back to the regional final at 3:30 p.m. Saturday at Warren High in Downey against No. 2 Chino Hills.

Last year Westview was beaten by El Camino Real in the regional final.

“On PKs,” said Westview coach Peter Stogsdill. “But this game was crazy. I figured this one was going to PKs because we were gassed at the end.”

Westview was seven minutes from winning in regulation. Freshman Catarina Macario’s goal tied the score 1-1 for the No. 4 Falcons (23-3-1).

Sophomore Marley Canales gave Westview a 1-0 lead with 28:20 to play when she lofted a shot over Romines after a pass from Hailey Harbison.

“We honestly think we won the games that counted,” Meriwether said. “I was more nervous because we were playing Torrey than playing for a spot in the state finals.”