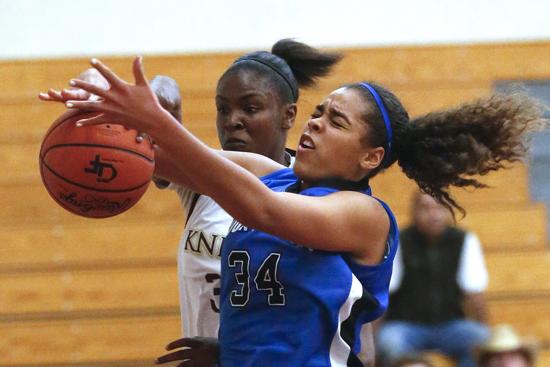 When the Southern California Regional girls Division V bracket was announced, La Jolla Country Day basketball coach Terri Bamford said she wouldn’t be surprised if her third-seeded Torreys and No. 8 Horizon met for the championship.

She was half right.

La Jolla Country Day will play at 10 a.m. Saturday at Colony High in Ontario, but its opponent will be No. 4 Reedley Immanuel, which downed visiting Horizon 85-51 in Tuesday’s regional semifinals.

It was a solid team effort as Sabrina Callahan led the way with 23 points, backed by 14 from Mai-loni Henson and 13 from Mariana Ecija. Taylor Johnson had 14 rebounds.

“We had a lot of deflections that led to steals and layups,” said Bamford. “We shot the ball well and got the ball into our bigs.”

Bamford said Hadiyah Muhammad defended against Mareshah Farmer, who came in averaging 29.3 points a game, and held her to 16.

Horizon (11-19) ran into an Immanuel team that took full advantage of playing at home as Sara Vasquez hit seven 3-point field goals in the first half.

“We lost assignments and they shot well,” said Panthers coach Vicki Carrington, whose daughter DiJonai scored 20 and had 25 rebounds to go with Sarah Porter’s 14 points.

In other SoCal Regional semifinal games: