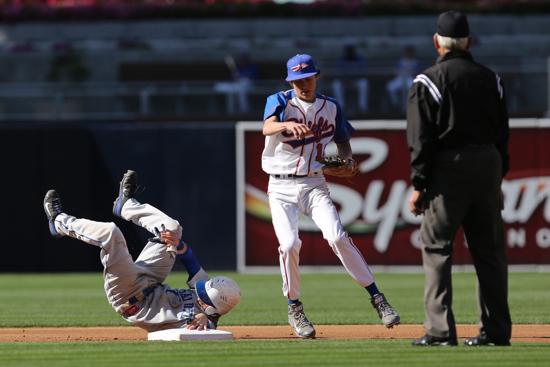 San Diego's Jasper Crusberg is safe returning to second as Clairemont's Jake Fitzmaurice is unable to apply the tag during a pick-off attempt at Petco Park.

San Diego High was in the visiting dugout and had Dodger-blue hats, but that didn’t stop the Cavers from feeling like the hometown team Thursday evening.

After all, the “San Diego” across their jerseys was accurate, the interlocking S and D logo on their hats was correct and, biggest of all, they were playing at Petco Park.

“We felt like the Padres,” senior Jasper Crusberg said. “It was just too cool.”

San Diego High beat Clairemont High 10-2 in the first of eight games over a six-day stretch at Petco. It’s the seventh year the preps have played downtown, with the experience rotated among the schools.

“I was pitching and it didn’t hit me until I looked up right when I threw that first pitch,” said Crusberg, who pitched the bottom of the seventh inning. “Jake Peavy, Trevor Hoffman, all these guys have thrown on that mound. It was just indescribable”

Estrada, who allowed one run on four hits over five innings, said he had “chills” when he threw his first pitch.

“Can you imagine being able to play on a field like this?” said Cavers coach Tim Staninger. “What I was impressed with was that they were excited, but they weren’t too nervous. They seemed to have fun and played a great baseball game.”

The Cavers scored twice in the top of the first inning, then added four runs in the third, one in the fifth and the final three in the sixth.

San Diego’s Jagger Acosta had two hits, two runs scored and an RBI, and nine of the 12 Cavers batters had at least one hit. Clairemont (2-8) was led by Michael Cortez’s two hits.

“It’s something I’ll never forget,” Crusberg said. “I’ll tell my kids about this. It was unreal.”

But was it nerve-racking at all?

“It didn’t throw me off. I had to keep focused,” Estrada said. “But after, when I got off the mound, I was happy that I had this experience to play at Petco Park.”

Tournament finalists to be determined: