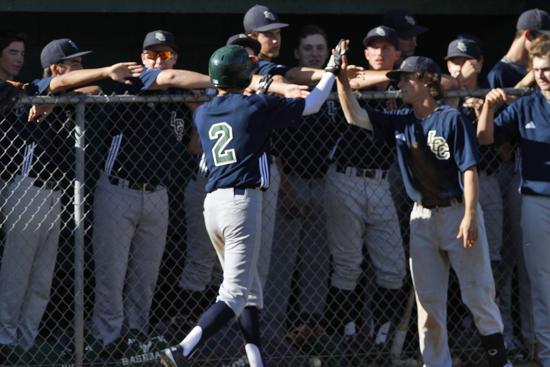 La Costa Canyon’s Mickey Moniak (2) is greeted by teammates after his two-run home run in the sixth inning.

Asked if he had ever had five hits in a baseball game, Moniak said, “Maybe when I was 10.”

Moniak, a left-hand-hitting leadoff man, entered the game batting .361 but said he struggled a bit in the first two games against Fallbrook.

“I was in a pretty good groove before we played them, but I lost it a little bit,” Moniak said. “So I was a little hungry coming into this game.

“I felt really good at the plate, nice and balanced, and I got some pitches to hit.”

Moniak singled to start the game, doubled in two runs in the second, doubled again in the fourth and slugged a two-run homer to left in the sixth.

He singled to right to drive in a run in the seventh and was left in the on-deck circle as the Mavericks (8-5, 3-0) batted around in the inning.

“Mickey was real pull-oriented at the start of the season,” said LCC hitting coach Jason Hill. “He’s a much better hitter when he doesn’t try to pull every pitch and sprays the ball to all fields.”

Despite the final score, Fallbrook (7-6, 0-3) had apparently tied game at 5-5 in the fifth when Mark Henning hit into a bases-loaded force play as the tying run scored.

But the relay throw from second to first went off the base runner’s hand. The umpires ruled interference and an inning-ending double play was called, wiping out the tying run.

“That was a huge play,” said Fallbrook coach Pat Walker, who argued the call. “They ended up beating us pretty good, but who knows what happens if we tie the game there.”

Instead, LCC scored three in the top of the sixth and five more in the seventh.

The Mavericks, who host Henderson (Nev.) Coronado on Monday in the Lions Tournament, have won five in a row, bouncing back from five early-season losses. Four of those — to Rancho Bernardo, Cathedral Catholic, Poway and Torrey Pines — were by one run.

“We played some really good teams tough with a very young team,” Hill said of a squad that starts two sophomores and four or five juniors. “We have the makings of a good team.”