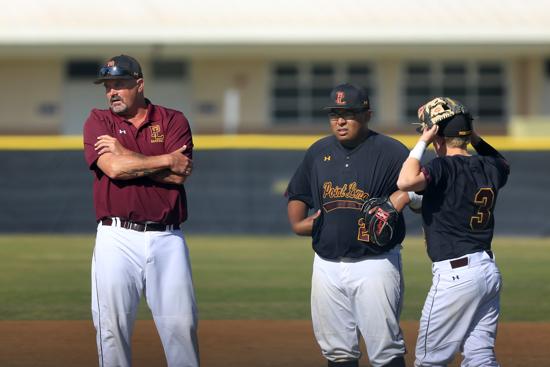 David Wells doesn’t have to work. He wants to.

But then again he never considered baseball work.

A standout at Point Loma High, Wells was a second-round draft pick of Toronto in 1982.

The left-hander went on to post 239 wins over 21 years in the big leagues, appearing in 660 games while pitching 3,439 innings.

In 1998, Wells tossed a perfect game for the Yankees.

A three-time All-Star, he led the American League by winning 20 games for the Blue Jays in 2000.

Wells retired after the 2007 season but is still in uniform, wearing the maroon and gold of his alma mater, working as the pitching coach on Joe Radovich’s staff at Point Loma.

“Once a Pointer, always a Pointer,” said Wells, one of several dozen former major leaguers who have coached at high schools over the years. “I don’t know if I’d want to do this for anyone else.

Wells was a bit of a wild child in high school, admitting he was the benefactor of some tough love.

“I had some problems, but the teachers and coaches here helped me work through them,” Wells said. “They treated a sometimes out-of-control kid with respect.

“So now, I want to help the school that helped me.

“I want to give something back.”

“With the knowledge he gives us, we feel we’re one up on our opponents,” said Pointers senior pitcher James Klueber. “We know what he tells us — about pitching and life in general — is true.

“I was a little awe-stuck last year. I was kind of shy around him. He has a pretty strong presence.

“But he came right out and told us not to be intimidated, to ask questions, ask for help.”

Radovich said the only trade-off with having Wells on his staff is Wells leaves the team and spends spring training with the Yankees in Florida.

The players, however, see that as a bonus.

“He comes back with all kinds of stuff,” said junior pitcher Ryan Arnold. “He’ll give someone Derek Jeter’s shoes, CC Sabathia’s glove — stuff like that.

“David is just a genuine guy. Everything that comes out of his mouth makes sense. I trust the pitches he calls and the stuff he tells us.

“He tells us not to be scared or intimidated by situations, not be scared to pitch inside, not to hit guys, but work inside.

“He wants us to challenge hitters, and if we do, he can live with the consequences.”

Radovich has found working with Wells to be a joy.

“David is the most helpful guy around,” Radovich said. “The coaches love him, the kids love him.

“And my gosh, he knows the game. Plus, he’s an alum of the school.”

Point Loma hasn’t won a San Diego Section title since 1982, Wells’ senior season when he was the Player of the Year.

“I’ve got Pointer Pride,” Wells said. “Hey, Don Larsen (the only man to pitch a perfect game in the World Series) played here. This is a legit school.

“Development is everything. If I have a horse, I’ll let him run. I want the kids to have fun playing.”

It’s unlikely any of Point Loma’s pitchers will come remotely close to matching Wells’ record — in high school or the big leagues.

“He has pitched where we can only dream of pitching,” Klueber said, “so why not listen.”

Some other former big leaguers who have coached baseball at local high schools: