Whether he is on a field or on a stage, Mar Vista’s Jimmie Hill has learned to deliver. 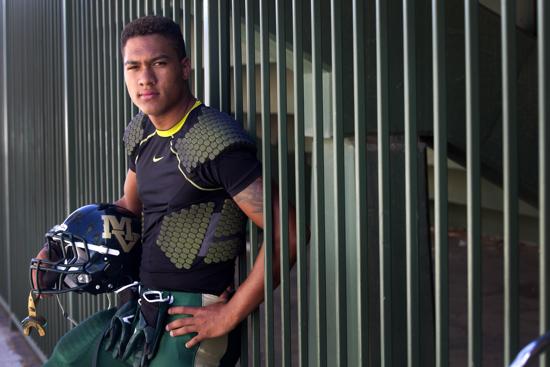 Jimmie Hill was pleased when he was one of more than 20 San Diego Section student-athletes chosen by the National Football Foundation/College Hall of Fame for its annual awards.

He gladly accepted the invitation but was in for a little surprise when he arrived.

“I was reading through the program when I saw I was selected the Offensive Player of the Year,” said the Mar Vista High senior. “I quickly started rewriting my speech. When you’re the Player of the Year, the crowd is going to expect more than a thank you.”

Hill’s speech in March was indeed polished and few noticed that he read much of it, entertaining more than 400 in attendance.

Hill has been entertaining on the football field the last three years for the Mariners and has been a vital cog on the track team as well. Just before leaving for the awards banquet, he was informed he’d been accepted to Harvard University.

Not having a single grade lower than an “A” since he started school helped produce a 4.6 GPA at Mar Vista, high even for an Ivy League school.

Rushing for 4,377 yards in three years, including 1,928 last season, will turn heads anywhere.

At 6-foot-1, 205 pounds, Hill was a punishing runner until he went out for track, which not only increased his speed, but gave him such an appreciation of what it takes to excel in that sport, he kept running.

“I still like to gain extra yards after I’m hit,” says the ever-upbeat Hill. “I played linebacker and safety until midway through my senior year because on defense I got to hit instead of being hit. Coach started playing me one way and suddenly I realized I wasn’t tired anymore.”

About that coach. Until his senior year he played in an offense — the double-wing — where throwing the ball happens about as often as an earthquake. Line up, let the linemen push their opponents down the field and follow behind.

As a sophomore he was second team All-State, rushing for 1,602 yards. Graduation took away most of his line so the next year his totals slipped to 847 yards. Then Tyler Arciaga took over as head coach and installed a whole new offense.

“At first I didn’t like it,” Hill said. “But no colleges run the double-wing. In the spread they could see what I could do — it made a great highlight film.”

Hill, like most West Coast athletes, could see himself attending a Pac-12 school until he went to the Eli Football Camp at Yale and saw how well he fit in with others looking to attend an Ivy League school.

Just when he was going to commit to another school, Harvard called and all but begged him to wait, take a trip and see how he liked it. He committed immediately even though he discovered snow for the first time.

“I kidded everyone that the heaviest thing I had to wear was a tank top,” he said.”But it really was cold.”

Harvard is getting an athlete who has been taught the importance of community service, which helped him score even higher on the NFF/CHF criteria, which counts 20 percent on extracurricular activities.

When he’s stressed, he has a perfect outlet — he plays the piano. Not that he’s a concert pianist, just that it helps.

“I unwind with each press of the key,” Hill said.

His future with the NFF/CHF may not be over, either. The Walter J. Zable Chapter sends its person of the year for regional consideration and after that, possibly national honors.

“I’m very excited about that, it’s such an honor,” says Hill, whose first name is a combination of his father (Jim) and mother (Vickie). “I already have something to tell my kids about.”