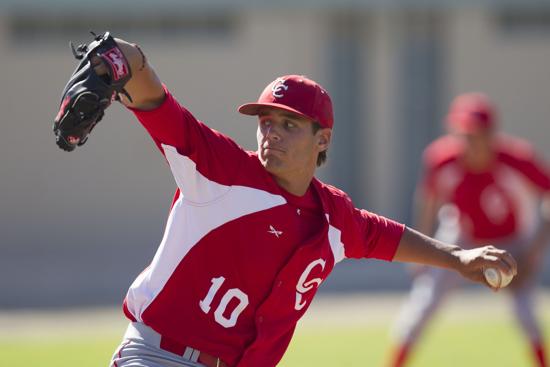 Pitcher Brady Aiken plays only baseball at Cathedral Catholic, but he takes a break to give his arm and mind a rest.

Jack McKeon, when he was general manager of the Padres in the 1980s, had a theory.

The best athlete at a high school, played quarterback on the football team, was the point guard on the basketball team, pitched and played shortstop on the baseball team.

"You could scout a kid's toughness and leadership on the football field and his vision and athleticism n the basketball floor," McKeon said at the time.

In this age of specialization, the three sport, high-school athlete has become nearly extinct.

For some, that one trick is pretty darn good.

But has playing just baseball taken the athleticism out of the game while increasing the injury factor?

"Kids feel they have to play one sport to be seen, to get that college scholarship.

"Showcases go nearly year-round. Players feel they have to specialize to get to the next level."

Brady Aiken of Cathedral Catholic is a one-sport guy. And he's pretty darn good at it.

The left-hander is projected to be one of the first players chosen in the Major League Baseball First Year Player Draft on June 5.

But he doesn't play year-round, instead taking three months away from baseball after a rigorous summer schedule that saw him go to Arizona, Chicago, Minneapolis and Taiwan with the U-17 Team USA.

"I needed a mental and physical break," Aiken said. "I kept in shape, ran, lifted weights, but tried to stay away from baseball, save my arm."

Because of showcases and travel ball, many high school coaches have shut down their summer programs.

"The summer season starts before school is out," said Ken Putnam, baseball coach at Mission Hills. "So it's hard to get players for the summer. The kids don't really want to see me.

"But you lose control when you do that, and I think that's where all the arm injuries come from.

"Kids have a hard time telling their travel-ball coach they're sore or they threw seven innings two days before."

Riley Adams of Canyon Crest is one of the top two-sport players in the county.

The 6-foot-5 senior averaged nearly 20 points a game in basketball, and is hitting .449 in baseball.

A catcher, he's projected to be drafted as high as the second round.

"I love basketball, but baseball is my future," Adams said. "I tried to do some baseball-related stuff during basketball season, but honestly I think it helped me stepping away.

"I was fresh when the baseball season started."

So was San Marcos pitcher Andrew Weston, but for a very different reason.

He started the 2013 season for the Knights, suffered a strained right elbow and was shut down for the rest of the season.

"I had been playing year-round for 10 years," said Weston who is 8-1 and has committed to play at Cal State Northridge.

"I'm sorry I missed playing for San Marcos last season, but I was fortunate my injury wasn't worse. Taking that time off allowed me to come back strong and have a good summer and travel-ball season.

"That has carried over to this season."

A little because of that, a little to save arms and reduce the chance of injury, San Marcos baseball coach Jeff Dufek has decided not to field a summer team.

"I think taking some time off really helps us," Dufek said.

La Costa Canyon baseball coach Justin Machado shuts his program down until mid-January and it hasn't hurt the Mavericks.

He also has had a number of basketball and football players on his teams over the years.

"The basketball players are usually a little behind because our basketball teams play deep into the spring," Machado said.

"But I love having football players. They bring a toughness to a team."

Donnie Carroll, long-time baseball coach and currently the vice principal of athletics at Grossmont High might have summed up year-round baseball best.