Jackson does it all for Rancho Bernardo 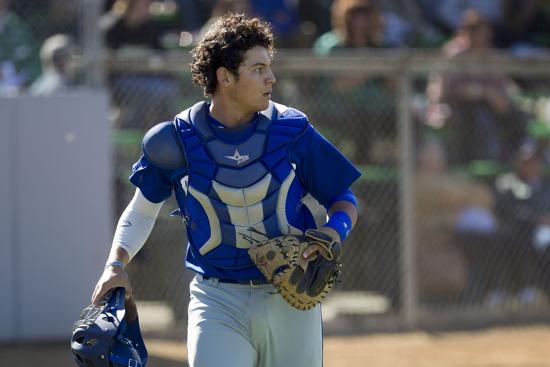 Rancho Bernardo catcher Alex Jackson (shown in a photo earlier this season) had a three-run double to help the Broncos defeat Carlsbad on Friday.

Alex Jackson is more than just a power hitter.

“He’s a ballplayer,” said Rancho Bernardo High junior right-hander Drew Finley. “He doesn’t just show up and play, he brings a swagger to our team.”

Friday, the senior catcher who is tied for the San Diego Section career lead with 47 home runs, threw out a runner stealing, walked, was hit by a pitch, slid head first into home to beat a throw from right field, and doubled into the left-field corner with the bases loaded, driving in three runs to break open a close game.

Rancho Bernardo went on to beat Carlsbad 8-2 in an elimination game of the Open Division baseball playoffs.

The top-seeded Broncos (29-4), the defending Open Division champions, host No. 8 Mira Mesa (10-20) Saturday at 11 a.m. in what has been tagged Elimination Saturday in all divisions.

Mira Mesa beat RB on Wednesday, a loss that sent the Broncos into the losers’ bracket.

“I’ll do anything I can to help the team,” Jackson said. “We have to win every game now.

“We aren’t looking for revenge Saturday. Saturday is a whole new game.

“We just have to go out, enjoy ourselves and play team ball.”

He allowed one earned run on four hits while striking out 10 to run his record to 5-0.

“I was going pitch by pitch,” Finley said. “If Alex put the sign down, I threw it.

“I had a good curve today, good secondary stuff, so the fastball was even more effective.

“Normally, I hit when I pitch, but I told the coaches I wanted to focus on pitching today.

“It worked out pretty well.”

Carlsbad (20-12) took the lead in the third inning with the help of two RB errors.

The Broncos tied it in the bottom of the inning on a Jacob Gorman RBI single, then put up four in the fourth thanks to Jackson’s double.

Casey Henderson’s bloop double scored two more in the sixth with Jackson scoring from first on an error.

“The one thing I wanted to do today was play well,” said Carlsbad coach Jon Montgomery. “We didn’t win, but we had a good season, and I think we played well.”