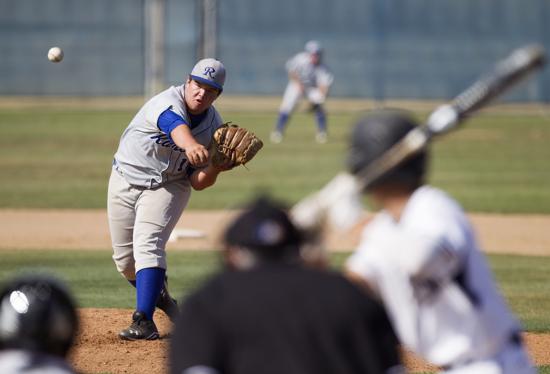 CJ Broussard pitches for Ramona, which will host Grossmont in Division I on Tuesday at 3:30 p.m.

Five of the six divisions were relatively easy to seed, and it shows.

Division I, however, is a different story.

Last Saturday's seeding meeting took about three hours - more than half of that was devoted to Division I where St. Augustine was seeded No. 1, Ramona No. 2, Poway No. 3 and Otay Ranch No. 4.

Only Ramona has survived the first week of play.

The Bulldogs host No. 6 Grossmont on Tuesday and must beat the Highlanders twice to advance to the final. On the other side of the bracket, No. 9 Helix plays at No. 5 Valhalla. Helix has to beat Valhalla twice to play for a title.

Division I was so jumbled, teams were so close, so competitive, there was no way the committee was going to get it the top four seeds right.

The Open Division - other than Granite Hills vs. Cathedral Catholic for the No. 2 seed - was easy.

In Division II, top-seeded El Camino is unbeaten and hosts No. 5 Eastlake on Tuesday. Unbeaten Santa Fe Christian is at No. Bonita Vista on Tuesday and needs only one win to play for a title.

In Division III, No. 1-seeded Santana hosts unbeaten No. 4-seed Parker while No. 10 Mount Miguel is at unbeaten No. 2 seed Mt. Carmel.

For the most part, the seeding committee got it right.

But one thing bothers me.

That means a play-in team can play as many as four games the first week. So a seeded team has a definite pitching advantage the entire first week.

That was evident Saturday in the Steele Canyon-Ramona game.

Steele Canyon coach Dan Herat has a good team, but the Cougars aren't deep in pitching.

"We didn't have a lot of arms left," Nerat said. "We were out of gas and playing a good team. We got the ball up, and they made us pay."

Honestly, I'd rather see an eight-team Open Division, followed by four 16-team divisions.

That would eliminate Division V, but could keep the double-elimination format and even out the pitching.

It would be up to the coaches of the No. 1 seeds to decide if they would gamble and use a second-line pitcher against the No. 16 seed in the first round.

"I've found that to win a championship you have to gamble with your pitching at some point in the playoffs," said Cathedral Catholic coach Gary Remiker.

"We did that a couple of times at University, we even came back through the losers bracket to win titles.

"In the Open Division, though, teams are too good. You can't really gamble and win."

With Sunday and Monday off, all the remaining teams should have their rotations in order. All the No. 1 starters should match up Tuesday.

So now is when the real playoffs begin.