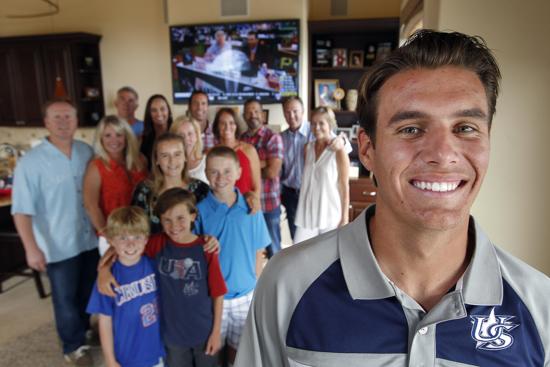 Cathedral Catholic High School pitcher Brady Aiken with family members standing under the TV monitor showing the MLB draft behind him while in his family's Cardiff by the Sea home on Thursday. Aiken was selected by the Houston Astros as the first pick in

Clean delivery and a fastball that has touched 97 mph. Threw 59 2/3 innings with 111 strikeouts. A quarterback, he gave up football after his sophomore season. A UCLA signee, the Astros would like to hold him to 20-25 innings this summer.

A power hitter, Jackson hit 11 home runs this season, and has a San Diego Section-tying 47 for his career. Because of his strong arm and athleticism, the Marlins said they'll move Jackson to the outfield. He signed to play at Oregon.

A big athlete who can hit, run and throw. Scouts say he has a chance to be a five-tool player if he has a power surge. An above average defender in center field, he may move to right field as he progresses through the minors.

No question Joe can hit. But does he have a position? He had a great summer in the Cape Cod League as a catcher, but was used as a utility man at USD, catching, playing the outfield and first base. The Pirates see his value as a catcher.