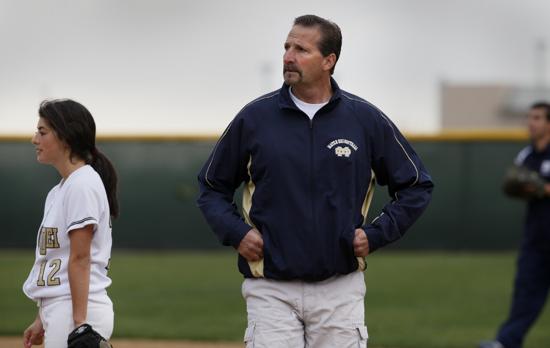 In this photo from 2012, in the midst of a championship streak that has now reached five years, coach Mike Centrullo watches a Mater Dei practice.

Everything must come to an end eventually. Mike Centrullo knows that, but he’s sure enjoying the ride while it lasts.

And for his Mater Dei Catholic softball program, the ride started five years ago with the Crusaders’ first section title and has been rolling along ever since, the fifth straight championship coming this spring.

Not that this one came easy, but with the experience he gained the first 10 years he coached and over the last five years, he has a pretty good idea what it takes to win a title.

“Of course, it takes luck,” he admits right off the top. “But it’s a lot more than that. You can create your own luck by doing the right things.”

He isn’t talking about great pitching, slick fielding or timely hitting, although all of that helps. He’s talking about interaction between the coaches — there are seven of them at Mater Dei — and the players.

“You’re talking about understanding the players, about letting them know you care about them and their family,” he said. “We’re talking about even during the offseason being there for them if they need help academically, for example.

“We want them to respect the coaches and not fear them and I think we finally got everyone to buy into that with the first championship team.”

Centrullo credits his daughter, Shelly, who was a player on that club, with providing some balance.

“I was harder on her and her sister Gina than anyone on the team but Shelly kept me in check by keeping things light,” Centrullo said. “I ask them to be serious at practice and the games, but the rest of the time they do things normal high school kids like to do like having sleepovers and going to movies.”

One of those watching almost every game of that first title team was Lindsey Finch, an eighth-grader whose sister Avery played for the Crusaders. She knew she’d be following her sister and couldn’t wait.

“I knew I wasn’t going to start every game, maybe any game, because a lot of players returned,” said Lindsey, who will take her game to Franciscan University in Steubenville, Ohio. “I felt I contributed because my nickname was “encourager,” because I was an enthusiastic cheerleader from the dugout.

“Since we unexpectedly won the first title, I wanted to see what it would be like to win another. And another. No question this last one was the hardest one.”

The Crusaders had only two seniors who played but they came on strong until they faced San Pasqual in the Division II semifinals. Leading 3-0, they gave up three runs in the seventh. Then three more in the top of the eighth.

Down 6-3, the first two Mater Dei batters got on. Finch bounced a ball over the fence for a ground-rule double. She then scored the tying run in a risky squeeze play. An errant pickoff play allowed the winning run to score.

That kind of play typified the team’s never-say-die attitude.

Centrullo says his assistant coaches, some of whom are veteran head coaches, have made his job easy. But he knows there are those who say the Crusaders, the only parochial school in the Metro Conference, benefit because they recruit.

“The program and the facilities, which are second to none, recruit for us,” he answers. “We follow the rules closely. If someone asks me about coming here, I tell them to talk to the director of admissions.”

When asked how many more consecutive championships he can tag on, he laughs.

“Who knows?” he said. “When we were Division IV, the level of competition wasn’t as strong. They moved us up to Division II and I’m sure we’ll be in Division I next year. The difference is the big (public) schools are deeper, there are no easy outs in the lineup.

“But we want to play the best. We played Open Division teams this year, so we’ll see. In think in a couple of years we’ll be ready to play in the Open Division.”