CIF rules put a cap on how long, how often squads can work out 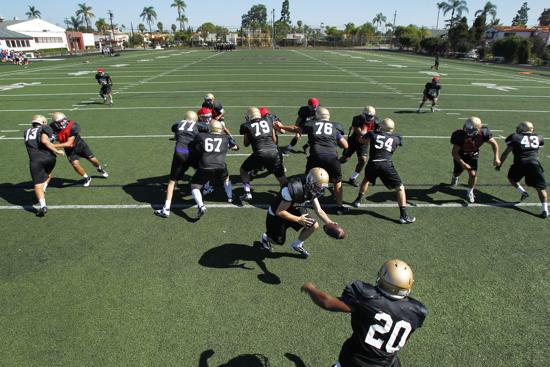 Bylaw 506, which was passed in May by the California Interscholastic Federation, places limits now on how long and how often teams can practice.

Madison coach Rick Jackson is among those wondering how players will respond in games if they haven’t been pushed to their limits in practice because of reduced time on the field.

“On Friday night, when your back is against the wall and you’re dog tired, what are you going to do?” asked Jackson. “You have to put kids through that process a little bit to really find out about them and so they can find out about themselves. … Are they going to cower or step up?

“You can’t get that anywhere else (but practice). You just can’t and there’s no replacing that.”

The new rules affect all sports but have been scrutinized the most in football. Teams are limited to 18 hours of practice Monday through Saturday, with no more than four hours in a single day. In addition, two-a-day practices are no longer allowed on consecutive days.

Further cutting into on-field practice time, film sessions, weight training and meetings conducted outside of school hours must be squeezed into those 18 hours.

The penalty for exceeding the limits could be anything from loss of practice time to a suspension of the team’s coach, depending on the severity of the violation.

Several coaches interviewed were unanimous in their opposition to limiting practice time in the weeks before school begins.

“Once school gets going, it’s not an issue for us,” said Ramona football coach Damon Baldwin. “But the preseason, all the stuff that we do to prepare, prior to school starting, that’s where we’re going to run into some constraints, with lifting, with films, with the extra stuff that we do.

“I just would like to see them rethink that preseason thing.”

Jerry Schniepp, commissioner of the CIF’s San Diego Section, said the practice limitations were given “several years” of discussion before the new bylaw was passed.

“They have a good argument. I can understand it,” Schniepp said of coaches who would like to see time limitations eased in the weeks before school starts.

“Usually, with something like this, if that’s how our coaches are feeling, other coaches (around the state) are, too.

Baldwin said limiting time with the team in the summer is a potential safety issue, especially for freshmen and JV players learning proper technique.

“You want to keep your kids healthy,” Karlo said, “and that’s where I would see the big issue with it.”

“From my standpoint, a smaller school with less kids participating is going to be very impacted because their kids go both ways,” said McNair. “It’s going to be a mismatch on the field.”

Where teams cut time remains to be seen.

It may be warm-ups when trying to fit a pair of two-hour practices in one day.

It may be weights. It may be film study. It may be one aspect of the game plan.

One prediction by Baldwin: “The first three weeks you’ll probably see some sloppy special teams play because that’s an area some people will cut.”

In a related move, Gov. Jerry Brown last month signed into law a bill that caps full-contact football practices at 90 minutes per day and bans teams from conducting more than two full-contact practices in a week during the season. The law takes effect in 2015.