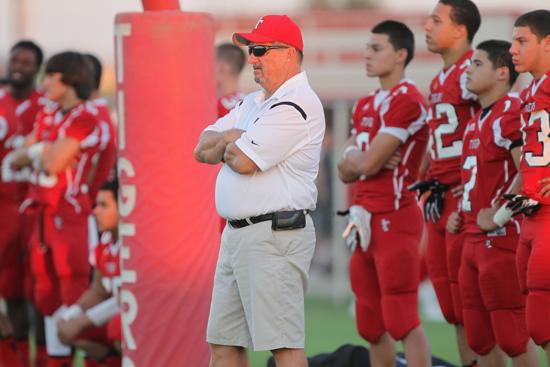 Scouting report: Self begins his 20th season in the program and fourth as head coach of the Wildcats, who have the ingredients to continue the winning trend. Self has won 18 of the last 24 starts. Rubio, who accounted for 1,000 yards and eight touchdowns, will direct the Wildcats’ wing-T offense. Aguirre figures to be one of the most explosive players in the league this year after producing 1,028 yards and nine touchdowns as a junior. Ortiz accounted for seven rushing touchdowns, intercepted three passes and made 72 tackles as a junior. Rogers will be a double threat as a halfback and defensive lineman.

Scouting report: Calexico has plenty of size. The big linemen include Zatarain (6-2, 280) and Estrada (6-3, 271). That duo should carve a path for running back Alberto Valdez, who rushed for 1,001 yards and nine touchdowns on 108 carries in just six games as a junior. Durazo (6-4, 188) gives the Bulldogs a key passer. Martinez can also throw the ball but may spend more time on defense. Antonio Coronel averaged 10 tackles a year ago. Calexico drops to Division IV this season, which should be a better fit.

Scouting report: The Spartans may have the horses to win the league championship, but it could come down to the Bell Game against Brawley in the regular-season finale. “We’d like to be in that position,” said Hobbs. Central’s kingpin is Ramirez, a two-time all-leaguer. Arvizu is also a two-year starter for the Spartans. Valbuena caught 10 touchdown passes a year ago, but the biggest threat against opposing secondaries is Williams (6-3, 270). “He’s a major college recruit, that’s for sure,” Hobbs said. “A guy his size being guarded by a 5-foot-6 defensive back. I like the matchup.” So do the major colleges, which include Boise State, Oregon, Arizona and SDSU.

Scouting report: The defending league champion Tigers lost 28 players to graduation and return only six starters. Bonillas takes over at quarterback for an Imperial crew that averaged 43.5 points per game a year ago. Imperial does not have a player the caliber of Oregon-bound running back Royce Freeman (2,824 yards, 41 touchdowns a year ago). Villanueva and Keck hope to fill the void. Culp anchors a rebuilding offensive line that includes Hutchinson, Evan Pumphrey, James Phillips and Cyrus Gilbert. On defense, Huerta, Benedict, Perez and Savage hope to hold opponents in check. Nose guard Jayce Haywood (5-10, 315) anchors the defensive line.

Scouting report: Dagnino says offense will be the Yellowjackets’ strength. A run at the league championship is within reach if the team can avoid injuries. Some computer rankings project Palo Verde for a sixth-place finish, but the computers don’t know Dagnino, so discounting his team isn’t wise. Whiting is an athletic talent, as well as Scott. Both players carry a 4.7 GPA, which has to give Palo Verde some kind of advantage.

Scouting report: Romero takes the offensive reins, looking for help from Rabb, Cuen and Demetrius Williams. Hunt and Jimenez help key the offensive line. Cota, a two-way lineman, will play a key role in the trenches along with Garcia, Torrecilla and Seitz. This was an offensive juggernaut a year ago but defense may be the strength this time around. The Eagles could be considered a long shot for the IVL title if their defense comes through.