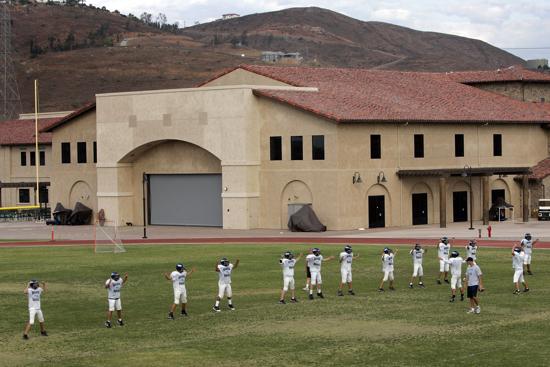 The Maranatha Christian program continues to adjust after switching from 8-man football to the 11-man game.

Scouting report: “We’ve got talented guys, just not a lot of them,” Kreglow said of the Crusaders, who have just 14 players. Lovato, a junior, led the team in rushing last season and Kreglow called him “ridiculously quick.” He’ll also play outside linebacker, prompting his coach to dare opposing offenses: “Just try to run the sweep on us.” Senior quarterback DeJong hasn’t played for two seasons and will need time to adjust. Wright and Patton anchor the offensive and defensive lines. The Crusaders have a solid core and hope the work they did this summer with Marine Corps drill instructors will pay off late in the season. “We’re going to come out and kick your butt,” Kreglow said. “Look for us to be a winning team — I guarantee that.”

Scouting report: The Knights won once last season, play their games at a park instead of a stadium and have just 18 players on the team this year, yet Allen is optimistic his team can compete for a league title. Henkell completed 70 percent of his passes last season for 1,832 yards and gets back his three favorite targets — Gunn, Pinuelas and Watts — who combined for 11 touchdown catches last season. Fradette, a senior captain, anchors both the offensive and defensive lines. Injuries will be a major concern with such a thin roster of players who will play both ways. “We’re playing ‘ironman’ football,” Allen said. “We have to be in better shape than everyone else.”

Scouting report: The Eagles are still adjusting to the step up from 8-man football two seasons ago, but Cole believes he finally has a team good enough to make the playoffs after two straight down seasons. The team has 30 players — a huge number for a small school — including Cortes, a sophomore who passed for 1,251 yards in five starts as a freshman. Last season’s leading receiver, Schwan, a junior who Cole said has packed on a lot of muscle over the summer, should catch a lot of balls again. Adkins is a solid pass-catching tight end who must work on his blocking, while Bronson will get the majority of the carries out of the backfield.

Scouting report: The Warriors didn’t win a game last season, but James believes two or three key mistakes turned many close losses into blowout defeats — something they hope to avoid this year. Mitchell tried to do too much last season and paid the price with 14 interceptions, but James said his junior quarterback has shown signs of being smarter and knowing the system better during summer passing tournaments. He’ll have a lot of help in Alvarez, a returning first-team all-conference receiver, and Pion-Kentel, a hybrid playmaker. Na is a foreign exchange student from Korea who is obsessed with getting better and will be a playmaker on the offensive and defensive lines. “We can’t wait for August 29 to get here,” James said. “So we can put last season behind us and start fresh.”

Scouting report: The Royal Knights are the defending league champions and return most of their skill position players, including Santa Maria, who averaged nearly 10 yards per carry and scored 19 touchdowns last season. He’ll be the focal point of their run-oriented offense, while Matsumoto will provide backfield depth and Harrison will cause problems when they do look to throw. The team lost three starters from the offensive line, but Seydel, a sophomore captain, and Carbuccia, a senior, are experienced starters who will play both ways. “This team will go as far as our offensive line takes us,” Rheam said, adding they won’t be as strong as last season but should be in the mix to defend their league title.