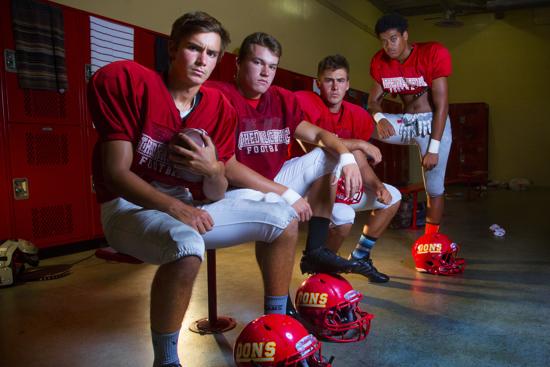 What: Prep football games to raise aid and awareness for military veterans transitioning to civilian life.

Cathedral coach Sean Doyle believes the next great back is in this year’s backfield. Who is he? That remains to be seen. The twist this season is the Dons aren’t showcasing one player in particular — they’re featuring four of them.

Senior Drew Cowell, who rushed 50 times for 402 yards last season, is the top returner. He is joined by three newcomers — juniors Hogan Irwin and Currie Thomason and sophomore Adam Eastwood.

All four players expect to get their share of touches on Saturday when Cathedral plays Westlake Village Oaks Christian in an Honor Bowl game at Oceanside High.

“I’m in a perfect situation,” said Doyle. “One of those guys is going to establish himself as our featured back.

“But if we could have three or four guys who are gaining 800 yards apiece as opposed to one guy getting 2,000 and the other guys getting 300, you’re far more dangerous. The way we have it now, any one of those kids could have a big game.”

Doyle said each player brings something different to the mix.

Cowell, the son of longtime Valley Center assistant coach Randy Cowell, “is one of those kids who just makes plays,” said Doyle. “He had a couple of great catches in our game Friday (against Folsom). … He’s played football forever, so he just knows the game.”

Thomason and Eastwood, who are rotating at fullback, both “have good speed, good size, good strength,” said Doyle.

The coach cited Irwin for his toughness, recalling a play two weeks ago in a scrimmage when Irwin was sent out on a seam route.

“The safety came over and just teed off on him,” said Doyle. “He hopped right back up, put the ball on the ground and walked away like, ‘Bring it.’ ”

In Irwin’s mind, all four backs can bring it for Cathedral.

“We’re all interchangeable parts,” he said while noting the responsibilities are just as important for the players without the ball as with it. “All of our plays are based off one of us making a block for the other to spring a big play.

Said Cowell: “As long as we (meaning the team) get it in the end zone, we’re good.”

This is not to suggest there isn’t some competitiveness amid the camaraderie.

“All of us are competing, trying to get the ball in the game, and that adds on to the pressure being put on us in practice,” said Eastwood. “Each of us wants to do better, trying to outcompete the next guy.”

There remains work to do. The running game never got established in last week’s 55-10 loss to Folsom. The opponent had something to do with that, but the backs could have been better.

Doyle said on the second play of the game the Dons opened a huge hole for the fullback. But he took too long to get through it and Folsom’s linebackers recovered to make the play.

“What ended up being about a 3- or 4-yard gain should have been about a 15- to 20-yard gain,” said Doyle, who made it a point of emphasis with the players.

And what did they learn?

Doyle said guys like Gaffney, Sumler and Green had to learn, too. They did, and now they’re doing the teaching.

That’s another good thing about having a rich running back tradition. There’s plenty of examples to cue up on the computer.

“I’m showing them tracks with Tyler or Demetrius or Justin,” said Doyle. “It’s like, where you’re two yards downfield, these guys were six yards downfield.

“It’s a learning process. … They’ll get there.”