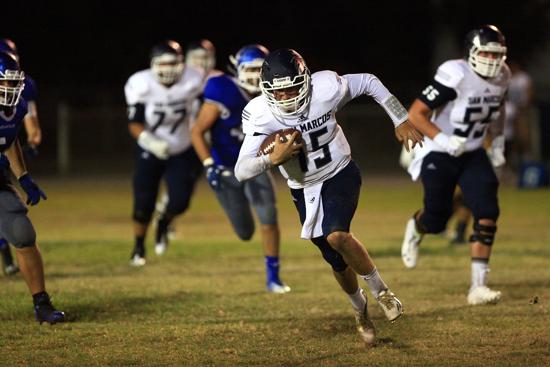 The Knights (2-0) jumped out to a 21-0 lead on the first play of the second quarter when James Harwell connected with Tyler Nix for an 18-yard touchdown. But Chula Vista scored three straight touchdowns — and missed three straight conversion attempts — to cut the deficit to just a field goal midway through the third quarter.

But San Marcos scored on its next three possessions to secure the win.

Harwell completed 21 of 34 passes for 222 yards and three touchdowns and added a 14-yard TD on the ground to lead the Knights. Harwell rushed for 56 yards and completed passes to eight different receivers.

“It will be huge if we’re lucky enough to be 2-0,” San Marcos coach Jason Texler said before the game, and his team certainly needed good fortune.

The Knights turned the ball over four times after starting six first-half drives in Chula Vista territory. But a few timely sacks and turnovers when Chula Vista cut into the lead, and a big defensive stop on fourth down, turned luck in their favor.

Chula Vista (0-2) struggled with penalties but still managed to cut the deficit to three points in the third quarter when Mario Cabada connected with Brandon Cabrera for a 32-yard score.