Mobility is a big key for Aste 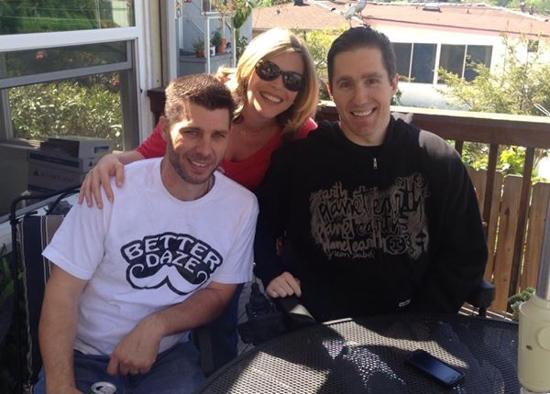 When your hopes and dreams are derailed, you need to find another path.

Cut down by an injury that saw him break two vertebrae in his back as a sophomore football player at Orange Glen High in a game against El Camino in 1988. It's an injury that has confined him to a wheelchair, so Aste hit the books.

He earned an undergraduate degree from San Diego State, graduated from the University of San Diego School of Law and passed the bar.

Now finally, after working as an intern and part-time for law firms, Aste, 31, will start a full-time

The problem is that he lives in Escondido and can't depend forever on his mother, Kathleen, to drive him to Front Street, near Horton Plaza, the Gaslamp District and the East Village.

In need of hand and voice controls for his late model Honda Odyssey, his friends stepped up.

Still, there is a lot of expensive, time-consuming work that needs to be done before Aste can drive on his own.

Cree Morris, Jessie Dooley and James Staake, the mover and shaker behind OG Fest, which was started to reconnect Orange Glen alumni, teachers and administrators, didn't want to give a dollar figure on the van conversion. They'd like to use any donation overages to help other OG alums.

"I've been taking lessons. The conversion people have been busy fitting my wheelchair into a driver's chair.

"And we need to figure what voice-commands I need, what push-button things I need - turn signals, lights, wipers.

"There is a lot of unknown here. A lot of apprehension.

"But I'm a motivated person. I was playing varsity football as a sophomore. I have the instincts and coordination to do this."

Staake would like to present Aste a fully-equipped van at OG Fest 2.5 - a Christmas-themed get-together on Dec. 13.

"We had hit a brick wall on this conversion when we called Dr. Rob Johnson, Better Life Mobility and Mike McGowen of MPS Corp," Staake said. "They helped us cut through the red tape and get this rolling.

"Eric Johnson of CablingPlus in San Marcos has committed to help converting a new home when Aste moves closer to work.

"I managed to stay in touch with Dylan and went to Thomas Jefferson School of Law with him," said John Masnica, a 6-foot-5 monster on the boards who led Orange Glen to the San Diego Section Division II boys basketball title in 1999 and is now an expert in business law.

"This is such a cool thing James, Cree and Jessie are doing. Dylan is an inspiration. I know this vehicle will change his life."

Vu Dang, who played football and baseball and graduated from Escondido, was also there. Dang, who spent two years at OG, owns Dang Good Yoga and needed help with medical bills.

Recently, an OG alum lost her husband to cancer and was living out of her car. Members of OG Fest stepped up to help.

"Word is getting out about what we do, that James Staake is a powerhouse," Dooley said. "Dylan has never asked for help. Maybe that's a reason everyone has been so willing to step and help."