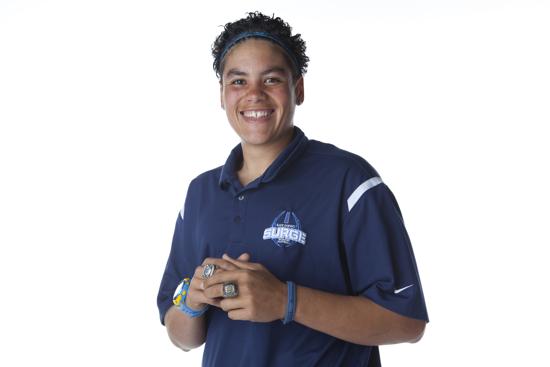 As is often the case, she looked to the current JV coach — Knengi Martin.

What makes this move unique is that Martin is a woman.

According to Mark Tennis, whose Cal-Hi Sports has chronicled high school athletics for decades, Martin is the only current female varsity football coach in the state and only one of a few in the country ever. Certainly, she’s the first one in San Diego.

And not just at any school, but one that — despite recent struggles — has one of the richest football histories in the state. These are the Cavers of legendary Brick Muller, Charlie Powell and Deron Johnson. A football program that was crowned national high school champion in 1955.

“When she took the reins, we knew that she would be the first — at least at this school,” Montero said of the Cavers, who have been fielding teams since 1895. “We’re happy to give her a chance.”

Heat issues have prevented the Cavers from practicing this week, but Martin is fortunate that the next game isn’t until Sept. 26. She will be the head coach for the rest of the year. Like all prep coaches, she will be evaluated after the season.

“We wanted someone who was already on the staff,” Montero said. “There wasn’t enough time to go through the hiring process. When we offered it to her, she took it. Her communication with the players on the JV has been great.”

Not only did Martin coach the freshman team last year before moving to the junior varsity, but she is a player with the San Diego Surge of the Women’s Football Alliance, having worn shoulder pads since 2003.

In 2012, she played linebacker for the gold medal-winning U.S. team in the International Federation of American Football Women’s World Championships. In her 11 years, she has been the team MVP nine times — including last season

“I’ve known for a while I wanted to be a head varsity football coach in high school. I just didn’t expect it to happen this way,” said Martin, 30. “I’ve always enjoyed working with Coach Packwood and appreciate what he’s taught me.

“I don’t think being a female will add any pressure because I’m passionate and knowledgeable about football. I do respect the fact I’m something of a pioneer, and, if an individual is qualified to coach a sport, maybe this will allow them to follow their dreams.”

Though he hasn’t played for Martin as a head coach, two-way Cavers starter Shay Urrea, a senior with a 4.2 grade-point average, said the team will attempt to make a smooth transition after the loss of Packwood, who was in his third year and, according to Montero, had already said before the season that this would be his last.

“It’s tough, obviously,” said Urrea, a strong safety and tight end. “No one expected it. But we’ll adapt and we’ve witnessed what she’s done with the JV team. We don’t look at it as a woman, but as just another coach with a high football IQ.”

San Diego was winless last season and had lost 16 in a row before defeating Mountain Empire two weeks ago. Urrea said the Cavers are close to being a better team than their 1-2 record shows and that Martin might be the boost the team needs.

“She was the receivers coach in passing league and she was not out of place,” he said. “She knows the quarterbacks and she’s an offensive-minded coach. The bottom line: She’s a coach.”

“Kids are talking about trying out now, if it’s not too late,” Urrea said. “They want to help her help us get back to where we should be — winning games.”