RB back not ready to give himself an ‘A’ 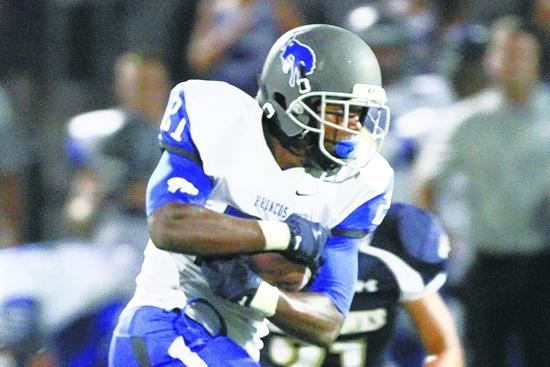 The numbers next to Tyree Range’s name are outstanding — 377 yards rushing, more than 9 yards per carry and eight TDs.

But when the Rancho Bernardo High running back was asked to give his performance a letter grade through the first three games, the senior did not hesitate to be as hard on himself as he is on opposing defenses.

“I feel like the first couple of games, and in the last game, I made a couple of bad reads on holes and I missed some blocking assignments. … I need to be better.”

Range’s “C-plus” performance has helped bring back excitement to the Broncos football program, which has not had a winning season since 2010 and went a combined 2-19 over the last two years.

“It feels like a college around here,” said Range, who transferred to RB from Patrick Henry last spring. “Everyone is excited about game day. It is cool. We have struggled the past couple of years, but the community is happy right now and everybody is supporting us.”

Range has only been fully unleashed in one of the first three games because the Broncos ran to huge leads early and let off the gas against San Pasqual and Serra. But Del Norte coach Leigh Cole got to see plenty of Range in Week 2.

“It’s always surprising when you see a guy that big move that fast,” said Cole, whose Nighthawks gave up 200 yards and two TDs to the University of Montana commit.

“His speed is the primary thing that makes it difficult. You have to play whatever direction he is going in, so when he changes direction, it is difficult. Then, of course, his size helps. You can’t arm tackle the guy.”

Countless hours in the weight room have made sure of that. Range has powered his way through tackles and then outrun defensive backs time and again. He has three TD runs of more than 30 yards.

“I am trying to break a big play on every play,” Range said. “I go into every play thinking about scoring and getting to the end zone. I have been like that since I started playing football in the seventh grade.”

It wasn’t until after Range’s freshman year at Patrick Henry that he realized football could be his ticket to a college education. That’s when he started to change his work ethic on the field and in the classroom.

“I was lazy my freshman year,” admitted Range. “I didn’t even start thinking about college football until my sophomore year. I realized I was better than average in sports and I could get a free education. My family isn’t wealthy so I wanted to help.”

Rancho Bernardo coach Tristan McCoy knew Range was serious about reaching his potential from the moment he stepped on campus.

“We set goals every year and Tyree was not here yet when we did it,” McCoy said. “But he came to me on his own with individual goals and team goals. Never in my 13 years of coaching did I have a kid come to me on his own and do that.”

Now Range has a scholarship lined up, his grades headed in the right direction and a highlight reel full of jaw-dropping runs.

But he won’t be satisfied until those C-plus performances start turning into A’s.