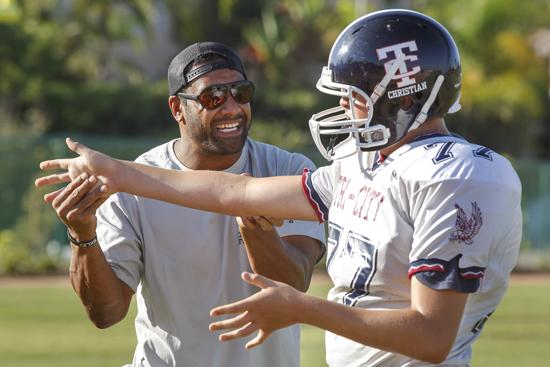 Pisa Tinoisamoa, who was a second-round draft pick by the Rams and played nine seasons in the NFL, works with Tri-City Christian football player Nathan Morrow.

VISTA — When head coach Rick Brown told his football team at Tri-City Christian that he had hired a new defensive coordinator, and that he was a dad whose four children attended the school, the Eagles had no idea what they were getting.

Most of them had never even heard of him until, that is, they Googled him.

What they got was Pisa Tinoisamoa, a former linebacker from Vista High who played in the NFL for nine seasons before retiring in 2011.

All three were coaching on the same field this summer during a passing tournament.

“We all got started here and, of course, we were all linebackers,” Tinoisamoa said.

“Now we’re all trying to teach everything we know about this game. Sometimes, these kids are like my own kids and they don’t hear a word you say. Our job is to get through that.”

“He knows so much about the game since he played on Saturdays and Sundays,” senior Josh Edington said. “He’s played at the levels we’d all love to reach. He plays defensive tackle on the scout team and still blows up plays.”

Said senior Alex Beck: “My parents didn’t believe me when I told them an ex-NFL guy would be coaching us.”

Tinoisamoa, 33, had an impeccable résumé as a player, including being on three San Diego Section championship teams at Vista, playing collegiately at Hawaii as well as a standout career as a pro with the Rams and Bears.

But coaching at Tri-City Christian is a new experience for Tinoisamoa, one he never envisioned.

“I didn’t want to be a coach,” the former second-round pick by the Rams in 2003 said as he watched the Eagles stretching at practice on their new field. “That’s what every ex-player does, coach or broadcast. How cliché is that.”

But after his final game in Chicago, Tinoisamoa struggled with, as he put it, staying relevant.

He and wife Shannon, who graduated from Vista rival Rancho Buena Vista, and their four children — Kaleb, 11; Mylie, 8; Ryder, 7; and Tatem, 4 — remained in St. Louis for one more year before returning to Vista, a place Tinoisamoa fled after high school.

“I thought coming back as a retired player meant I was a failure,” he said. “I thought I would play forever and it took two years to get over that feeling.”

Yet it was in his hometown — a place he figured was still just as bad for him as the day he left for college — that Tinoisamoa found what he was looking for.

As much as he hated to admit it, football was the venue and coaching was the only thing that made sense because it kept Tinoisamoa on the field where life has always been much simpler for him.

After his sophomore year, when Vista upset highly regarded Morse to win the first of the three section crowns, Tinoisamoa was sitting in the rear seat of a car traveling through Vista when it struck a bump in the road causing the vehicle to flip several times.

Tinoisamoa had the good fortune that night to have a doctor with a cellphone driving the car behind them who reported the life-threatening crash, which was less than a quarter-mile from a fire station and paramedics.

“There are a bunch of things like that which could have kept me from moving on,” Tinoisamoa said. “Trust me, I know how lucky I’ve been.”

Before that incident, Tinoisamoa was a passenger in a car his freshman year that was struck by another car. When the driver took off they pursued and a battery charge eventually was filed against him.

“We were going to luau practice at church and here we were, after getting hit by the other guy, in handcuffs on the curb,” Tinoisamoa said, shaking his head.

He got probation, but a fight at the Del Mar Fair the summer before his senior year resulted in more than four months in jail leading up to graduation.

“I had a scholarship from Hawaii and that’s why they let me out early,” Tinoisamoa said. “I knew I had to get out of Vista and I knew I had to stay out of trouble in Hawaii. One more incident and they’d lock me up.”

Thus began a journey that started in 1999 by leaving Vista for what Tinoisamoa thought would be forever and ended a year ago when he and his family returned home. And the former linebacker discovered a way to return to his sanctuary on the football field.

“Football was what I did,” he said. “Most of the kids on this team want football, but they don’t need football. I needed football.

“If it wasn’t for football I’d either be in jail or dead. That desire to excel is what I have to teach.”

Considering he thought coaching was not for him, Tinoisamoa is having a blast at his kids’ school.

High school: A three-time All-Palomar League pick, three-time All-CIF San Diego Section performer and three-time All-State selection. Led Vista to section titles in 1996, ’97 and ’98. As a senior, became the only player in section history to earn first-team All-CIF honors on offense as a running back with more than 1,600 yards and 23 TDs and defense as a linebacker with 75 tackles.

College: Started 27 of 35 games at Hawaii, recording 289 tackles, including 210 solo stops, along with 15.5 sacks and two interceptions. Was the team’s defensive MVP along with being a first-team All-Western Athletic Conference pick as a senior.

NFL: Signed as a second-round selection (43rd overall) by the Rams in 2003. Started all 16 games as a rookie and had 76 tackles, two sacks and three interceptions to become the first rookie to lead the Rams in tackles. Signed with the Bears in 2009 but suffered another knee injury and was released the following spring.

Coaching: Joined the Tri-City Christian staff as defensive coordinator in 2014.

High school: An All-Avocado League pick as well as an All-CIF honoree in 1999 as a senior when he had 134 tackles and 10 sacks. Also the league’s Defensive Player of the Year. Ran the 100 and 200 in track.

NFL: Signed as a fourth-round pick in 2004 by the Rams, the linebacker became one of only two players of American Indian descent in the NFL. Best season in St. Louis was 2007 when he had 85 tackles and 2.5 sacks. Signed with the Packers in 2008. Best season in Green Bay was ’08 when he had 69 tackles and eight pass deflections.

Coaching: Joined the Carlsbad staff as defensive coordinator in 2012.

High school: A two-time All-Imperial Valley League pick. Twice named the league’s Defensive Player of the Year after recording more than 600 tackles with the Tigers. Was an All-CIF pick as a senior in 1997. Also played baseball.

College: A three-year starting linebacker at UCLA. Was the team’s MVP on defense and a second-team All-Pac-10 selection when he had 88 tackles in 2000. As a senior in 2001, topped the team with 111 tackles and 6.5 sacks and was conference Defensive Player of the Year and a first-team All-American.

NFL: Signed as a first-round pick (31st overall) in 2002 by the Rams, the linebacker posted 163 tackles in his three seasons. Thomas was traded to Packers in 2005 and was released by Green Bay in 2006 before training camp. He played three seasons with the Raiders (2006-08) and was signed by the Redskins in 2009 but was released after the final preseason game that year.

Coaching: Joined the Oceanside staff as linebacker coach in 2014 after coaching at Torrey Pines last year.