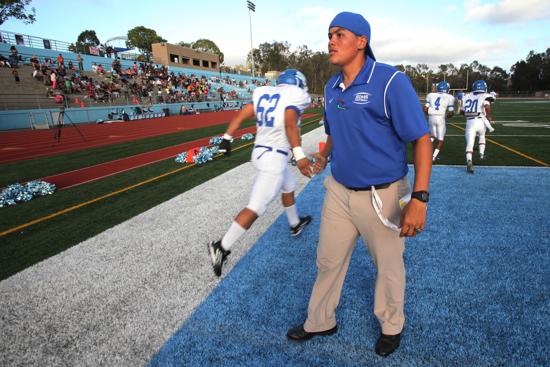 San Diego High football coach Knengi Martin slaps hands with her players as they take the field before a game at University City on Friday night. Martin is believed to be the only female head varsity football coach in the nation.

The first sign that something different might be afoot at University City High on Friday night came in the dirt lot above the football stadium, where TV vans filled the front row, antennas stretching to the heavens.

There were reporters hovering on the field before the Centurions’ game against San Diego High, toting pens and pads, photographers lugging cameras.

“I’ve been a coach or player for 28 years,” San Diego assistant coach David Chamberlain said, “and I’ve never seen this many cameras at a high school football game in my life.”

“Silent K,” says Martin, who is outgoing and silent about little else.

MaxPreps.com, Martin is believed to be the only woman in the country in charge of a high school varsity football team. As if on cue, when Martin led the Cavers on to the field, a fighter jet from Marine Corps Air Station Miramar roared from above.

“We’ve had helicopters following us all day,” joked Chamberlain.

The game did not fit the Hollywood script, University City handing San Diego a 44-0 defeat. A historic program that has been playing football since 1891, the Cavers have fallen on hard times, with only one win in their last 19 games.

“They played their hardest. They gave it their best shot. I’ll go to battle with these guys any day,” Martin said.

For her part, Martin downplayed the significance of her feat.

“My real hope is it allows other people to pursue their dreams,” she said. “Whatever stereotypes that might be out there, break through them and follow your passion.”

Raised in Palo Alto, Martin said her father “wasn’t really in the picture” and that her mother “wasn’t into football.” She was drawn to football, she said, “because of the physicality. I was always a rough-and-tumble kid.”

Her first sport, in fact, was hockey. She played water polo and basketball at Gunn High, plus one season of football on the freshman team.

In women’s football circles, Martin is a bit of a legend. She has played semi-professional football for more than 10 years for the Long Beach Quake and San Diego Surge. Look her up on YouTube, and you’ll see some terrific collisions, Martin creating them at linebacker and fullback.

“If you’re an athlete, it especially means something when you know your coach can lay you out,” Cavers quarterback Grant Donovan told the U-T’s Chris Jenkins.

Martin does not teach at San Diego High. By day, she specializes in training football players, male and female, including many youths. She was appointed the Cavers’ head coach when Doug Packwood resigned after three games.

Martin’s breakthrough was supported by many. Banners, penned in pink, were taped across the top of the stands.

In a fine show of sportsmanship, University City’s students got in on the act, wearing eye-black strips reading “Martin” under one eye, “Rocks” beneath the other.