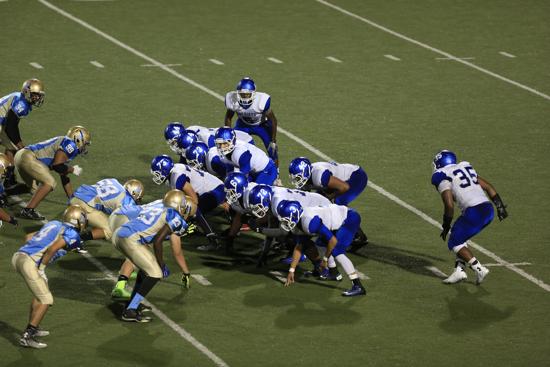 In the glory days of Ohio State football, the offense was known as "three yards and a cloud of dust."

That philosophy, however, leaves you with fourth-and-one.

"The first thing I asked our kids was 'What is three times four," said Tido Smith, who introduced the double wing, double tight offense to the Orange Glen High football team.

"I told them I'm only asking you to get 10 of those 12 yards to keep drives alive," Smith said.

The philosophy and the offense are working this season at Orange Glen, which has sprinted to the school's first 5-0 start since 1988, and Sweetwater, the defending San Diego Section Division IV champions, who are 4-0 this season.

Orange Glen hosts El Cajon on Friday in a homecoming game. Sweetwater is at Calexico, a team OG beat 48-16.

The offense is also working for Fallbrook, Mtn. Empire, Crawford and Hoover, all of which run some form of the double wing. Even Mt. Carmel and Escondido have double-wing packages.

And it worked for years at Mar Vista under Gary Pugh in the late '90s.

In the basic double wing formation, the five linemen are heel-to-heel instead of taking wider splits of 18 inches.

The quarterback is usually under center. The fullback is lined up just behind the QB.

"It's an offense that's difficult to install and get right," said Sweetwater coach Brian Hay, who led the Red Devils to their first championship in 29 years last season.

"Every season, it takes four or five weeks to get it down. You just have to dig in and have faith it will work."

The double wing is a run-oriented offense.

"This is a great offense for our kids," said Orange Glen head coach Jason Patterson, who was the defensive captain on that '88 team while Cree Morris - one of his assistants - was the offensive captain. "We have good offensive linemen and good backs.

"(The offense) fits our personality. You have to have a football IQ, but there are only four blocking schemes.

"There are four basic plays, but they can be run out of as many as 12 different formations.

"We have a tough, but undersized defense. So we looked for an offense where we could manage the clock. We wanted to keep our defense off the field, keep them fresh."

With more teams playing wing-T, I-formation and spread, defensive coordinators know how to defend those offenses.

The advantage of the double wing is opposing defenses don't see it often, so are at a disadvantage.

"We've beaten them all.

"The only way to stop this offense is to have 11 better people on defense."

Patterson said there are only eight basic defenses.

Since he doesn't know what to expect from opponents, the Patriots practice against all eight.

"It takes about three or four plays to figure out what our opponents are doing on defense," he said. "Then all we have to do is execute."

Glenn "Pop" Warner is said to have first introduced the double wing as early as 1912.

Ara Parseghian used it as a primary formation when Notre Dame won national championships in 1966 and 1973.

Don Markham is credited with bringing it to Southern California in 1994.

He took over a Bloomington High team in Riverside that was 1-9 in '93. Bloomington won is '94 opener 86-8 using the double wing.

Hay was coaching at Banning when Markham's Bloomington team scored 63 against him.

"The parents fight us because they want to see the ball in the air.

"What we tell the players is we're running this because we want to be good at something."