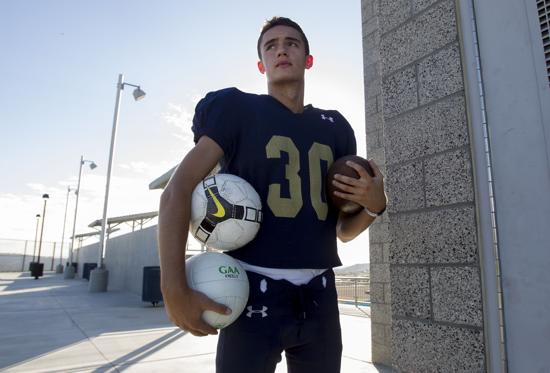 Grayson Farnham, who is the kicker for the Del Norte high school football team. Farnham also is skilled at soccer and Gaelic football.

A year ago, Grayson Farnham said the answer would have been easy.

"The answer was always soccer," said Farnham, a junior at Del Norte High. "But I'm into my third year of football, and I really enjoy both sports."

Farnham has a third sport - Gaelic football, something he learned from his stepfather Niall.

Gaelic football is a cross between basketball, soccer and rugby and is played on a 140-yard field.

The ball resembles a large volleyball.

In soccer, Farnham plays center back, a defensive position - and he's good at it.

A member of the San Diego Surf, he's also a member of the prestigious U.S. Soccer Development Academy. He played for Del Norte as a freshman, but of because U.S. Soccer rules, didn't play for the Nighthawks last season.

He'll play for Del Norte again this season, but not next because Development Academy players are not allowed to play for their school.

"I've played center back the last six years and love it," Farnham said. "I'm in control of the back line.

"I'm not an offensive player, but I will go forward."

He handles all the kicking duties for the Nighthawks - kickoffs, field goals, PATs and punting.

He has eight career field goals, three this season.

More than 90 percent of his kickoffs are touchbacks.

"This is a good kid with an amazing leg," said Del Norte football coach Leigh Cole. "I'll bet he's one of the top net-yardage punters in the county (averaging 42 yards a punt). He has great distance, great hang time.

"He has great hands to handle bad snaps and because of his background in Gaelic football, he can kick on the run.

"He made a 52-yard field goal in practice and it was good by plenty.

Because of Farnham's soccer commitments, Cole knows he must share his kicker.

So special teams go early and Farnham heads off to soccer practice.

"He has good technical ability. He's a very mature lad.

"He has a chance to play college soccer and based on his kicking technique, I think he'd be successful in football, too.

"Plus, he has good grades (a 4.2 GPA while taking a bulk of advance-placement classes).

"This lad is a diamond."

This is a big year for Farnham. The junior season is when college recruiters line up.

With soccer he has traveled extensively - Northern California, Arizona, Washington, Texas and Florida.

"I'd like to keep playing both sports, so that will be a factor," Farnham said. "And I know not every school has a scholarship for kickers.

"With a background in Gaelic football (where he plays with an adult team), I think I'm a little more athletic than normal kickers. The rugby kick was the norm for me.

"Because I play multiple sports, I'm very fit, one of the fastest guys on my teams.

"I think I'm a good time manager. I'm up early and go to bed late because academics are important.

"I don't know when the last time I saw a TV show.