Southwestern pencils out for football finals 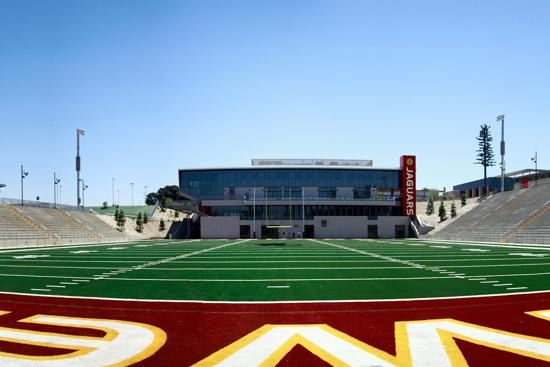 San Diego Section Commissioner Jerry Schniepp visited Southwestern College’s DeVore Stadium this week with his staff and came away more convinced than ever that it’s the perfect place to host this year’s high school football championships.

Six games will be played over three days across two weekends — Nov. 28 and Dec. 5-6 — at the Chula Vista facility, which recently reopened following a two-year $25 million renovation.

“Southwestern was our No. 1 choice from the beginning,” said Schniepp, who also had considered staging games at Mesa College or Escondido High. Qualcomm Stadium was not available this year because of the NFL schedule.

There are several reasons Schniepp is excited about Southwestern, beginning with DeVore Stadium’s new synthetic turf field and its four-story fieldhouse.

Participating teams will have access to the stadium’s home and visitor locker rooms. The trainers room also will be open for use.

End zone suites with balconies that include seating are expected to be available for purchase by parent groups or boosters from participating schools.

There will be no charge for parking.

According to a release last week from Southwestern College, the section is being charged $53,000 for use of the facility. That includes security inside the stadium. The amount is substantially less than the cost to play at Qualcomm, which is approaching $100,000 for rent and fees.

Schniepp said the section will pay for additional security outside DeVore Stadium, but he estimated that the cost savings could net the section $50,000 more than if the games were played at Qualcomm. That money can be used to help fund championship events in other sports, many of which run in the red.

One downside to playing at Southwestern College is its distance from some parts of the county.

“We do try to balance our championships around the entire section,” said Schniepp, who staged all the finals at Escondido High two years ago and used Mesa College for three games last year. “There is a definite effort made to do that. But Southwestern is the best facility to hold our events right now, regardless of where it is in the section.”

The commissioner said he did have some concerns with the number and configuration of ticket booths at DeVore Stadium.

“We’re going to push really hard preselling tickets to the participating schools,” he said. “We’re working on setting up sales from our office that are online so that people who aren’t affiliated with a school can buy tickets ahead of time, too.”

Ticket lines were an issue last year at Qualcomm, with more than 500 people still in line well after kickoff of the first game. Part of the problem was little or no presale at schools. That’s because semifinal games were played on a Wednesday, schools were closed Thursday and Friday for the Thanksgiving holiday and the championships were played on Monday.

That’s one of the trade-offs for playing at Qualcomm. A compressed time frame between the semifinals and finals is often needed to work around the NFL. But the quirky schedule is well worth it in the minds of coaches and players.

“The thrill of a kid coming out on that field … those are lifetime memories,” said Mission Hills Athletic Director Ken Putnam, whose Grizzlies defeated Oceanside for last year’s Open Division title.

“But some of the memories of walking down the tunnel, looking up at the Jumbotron, those are things young men remember the rest of their lives. It’s kind of like the cherry on top of the sundae.”

Schniepp has his concerns with Qualcomm, though, especially with the focus on player safety in recent years.

“Playing two football games in a five-day period is probably not the safest thing,” said Schniepp. “I don’t like being in that situation.”

Another downside to playing at Qualcomm is that 85 percent (or more) of the seats are empty. Total attendance for three games there last year was 9,700.

DeVore, which seats 7,250, will present a more raucous environment by comparison.

In addition, the costs for fans are greater at The Q because they must pay for parking and are charged more for concessions than any other prep championship venue.

In the final analysis, the most important thing for the teams is getting there — wherever there happens to be.

“I haven’t been to Southwestern yet, but I’ve heard great things about it as a venue,” said Barrett.

“At Oceanside, if you said we’re playing in the parking lot at Costco, we’d show up. We’d be there. … We would be grateful for an opportunity to travel that road.”

All games at Southwestern College’s DeVore Stadium in Chula Vista.