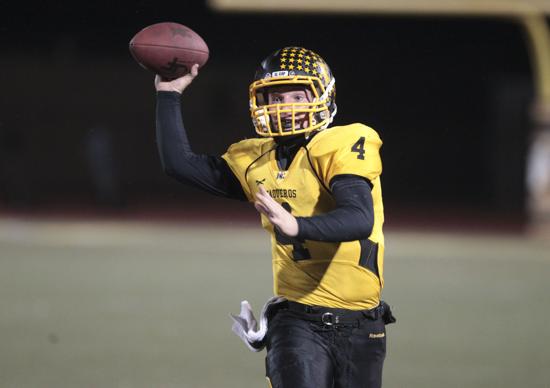 St. Augustine has won two of the past four meetings, including 19-7 last year. The Saints hope to have junior RB Elijah Preston (811 yards, 8 TDs) back from a high ankle sprain suffered four weeks ago. No. 2 Cathedral has won seven straight.

Eastlake senior RB Isaiah Strayhorn (981 yards, 10 TDs) needs 19 yards to reach 1,000 rushing yards for the second straight season. Bonita Vista has allowed just 16 points in its past two games but will be hard-pressed to keep No. 8 Eastlake out of the end zone.

This is No. 6 San Marcos’ best chance to beat Vista in years. The teams haven’t played since 2003. Vista leads the series 18-3 and San Marcos hasn’t beaten the Panthers since 1975.

A victory would assure El Camino of just its second winning season in the past eight years. Torrey Pines looks to get back on track after last week’s loss to top-ranked Oceanside.

No opponent has come within two touchdowns of Bishop’s this season. Santa Fe Christian comes into the game riding a four-game winning streak.

No. 9 Steele Canyon faces a must-win Grossmont Hills League game against No. 4 El Capitan. The Cougars have given up just 110 points. El Cap has scored 288 and allowed only 70 as QB Brad Cagle has thrown for 1,465 yards with 15 TDs and two interceptions.

Olympian is very much in the Metro Mesa League race but can’t afford to slip against Chula Vista. The Spartans have been outscored 142-3 in their last three games, including a 45-0 loss to Eastlake.

Carlsbad RB Dylan Rutledge, who has 1,014 yards and 11 TDs, is the man to stop. Top-ranked Oceanside is averaging 397 yards total offense and has scored 42 points in each of its last four games. QB Matt Romero has thrown for 1,464 yards. RB Josh Bernard has 13 TDs.

La Jolla averages 306.7 passing yards a game, most of those by QB Collin Rugg, who has thrown 216 times. Mission Bay RB Derrick Clark has 102 carries for 907 yards.

The loser is out of the Coastal League race. Horizon has scored 301 points behind QB Joshua Gaudet, who has thrown for 2,603 yards. LJCD QB Braxton Burmeister has thrown for 1,566 yards and 17 TDs.

The winner can take control of the City League. Henry is led by QB Cruz Samaniego, who has thrown for 1,293 yards and 20 TDs. Hoover has allowed just 59 points and has three shutouts.

RB can set itself up for a title run in the Palomar League with a win. QB Tucker Reed has thrown for 995 yards, but RB Tyree Range does the heavy lifting with 113 carries for 1,027 yards. Mt. Carmel QB Lucas Johnson has 1,360 total yards and has accounted for 17 TDs.