Helix senior is one of the top punters in the state 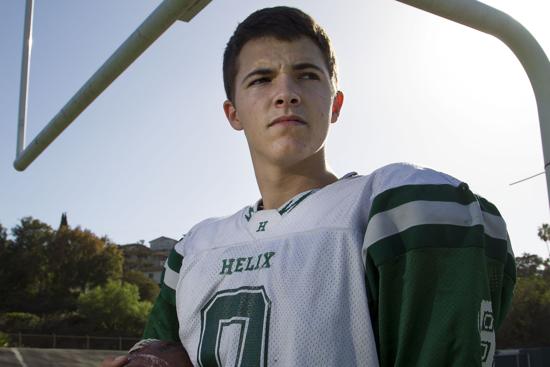 Helix punter Austin Rowley's longest kick of the year so far is 62 yards.

LA MESA — Helix High’s football field is 53 yards wide. From the sideline to the fence in front of the visitor’s stands is an additional 7 feet.

Austin Rowley knows every time just how well he has punted a ball in practice. The senior recently boomed eight kicks.

Four of those eight, without anyone rushing him, of course, sailed well over the fence and landed halfway up the stands. Three others also soared over the fence, falling in the first few rows. One barely made it across the field.

Not bad when the worst kick is more than 50 yards. It was also the only one that didn’t soar well into the stratosphere.

“Austin is one of the best punters in the state — he’s very rare,” said Mike Lewis, an assistant coach whose job it is to help Rowley evaluate each punt. “He doesn’t just kick them long, he kicks them high.

“A good punter is an offensive weapon. You want to make the opponent start deep in their own territory and he does that.”

Some punters are able to kick far, but boot line drives that are easy for the opponent to return. Others kick high, but short.

Rowley’s kicking isn’t just by chance or sheer athletic ability. Carrying his 3.9 GPA (with numerous AP classes) onto the field, he knows exactly what he wants to do and so far this year, the 18-year-old has been wildly successful, helping the Highlanders to a 7-1 record that includes being ranked No. 3 in the section and No. 11 in the state.

“I kick 20 to 40 balls a day,” says Rowley, who is generating interest from Cal Poly SLO, UCLA, Cal, San Jose State and UC Davis. “I think when I started kicking, the other players hated me because I only have to practice a half-hour to 45 minutes a day. But now they have accepted me.”

He says his 42.2-yard average with a long of 62 yards in a game certainly has gone a long way toward being accepted. The 6-foot, 205-pounder has not had a punt blocked — to which he credits a line that for the most part has been together since his freshman year — and the longest return this season is just 10 yards. Oh yes, he has landed seven punts inside the opponents’ 20 and not had a single touchback.

Head coach Troy Starr credits Rowley with avoiding what could have been a season-opening loss.

Against Ventura St. Bonaventure, Helix was backed up and on fourth down, Rowley had to kick from his own 10 with the clock winding down and the Scotties clinging to a 24-20 lead.

“The ball rolled on the ground back to Austin,” said Starr, “but he gathered it up and got off the kick.”

Rowley knew precisely what a block there would have meant.

“The average blocked punt goes 14 yards the other way,” he said. “That would have been 7 points. You usually have 2.4 seconds to get off a punt. I was able to grab the ball but since I’m right-handed, I ran to my right and kicked it rugby-style. It went like 32 yards, the worst of the season.”

No one complained, as Helix held on to win.

Rowley, who used to be in the marching band (saxophone and drums) and was part of the homecoming court last week, said by going to kicking camps he has learned booting the ball is a science. He points out that on his best kicks, the ball will spiral and land on the point, not the side.

“It’s more difficult for the return man to field a punt that lands on the point,” he said. “Usually you get a good bounce but not always.”

On his 62-yarder, against Cathedral Catholic, the ball bounced back toward Helix instead of bounding toward the goal line. It could have been 75 yards.

Again, no one complained.