RB unwraps JV back in upset of Ramona 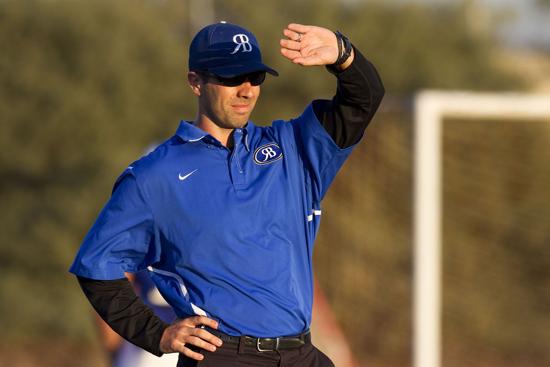 Rancho Bernardo High was going to wait until the postseason to unleash its secret weapon.

But with leading rusher Tyree Range on crutches, the Broncos took the wraps off JV sensation Milan Grice.

And the sophomore running back, who hadn’t had a varsity carry before Thursday, responded with 171 yards on 26 carries, culminated by an 11-yard TD run in the fourth quarter, as the Broncos upset No. 7-ranked Ramona 31-21 in a key Palomar League football game.

A Rancho Bernardo (7-2, 3-0) win next week at archrival Poway would give the Broncos their first league title since 2004. RB was 1-9 last season and 2-19 over the last two seasons.

“This is awesome,” said Grice, who also had two receptions for 35 yards. “In my first varsity game, to do this, is awesome.

“This was Senior Night, and it was really important to do this for my senior brothers. Still, I couldn’t have imagined it would end up this way.

“Varsity football is a different game. They hit harder and it’s much more up tempo.”

While Grice was a secret, RB’s defense wasn’t.

The Broncos had allowed just 93 points all season while defending league champion Ramona (7-2, 3-1) had scored 291.

And while Ramona rolled up 339 yards total offense, the Bulldogs never seemed to be in sync offensively.

“We played every down like it was 0-0,” Jones said. “Three sacks sounds like a great individual effort, but I couldn’t do that without everyone else doing their job.

“To come from where we came to this is incredible.

“It’s a testament to the hard work we put in over the summer. It shows that we’ve played with heart all season.”

The Broncos were 1-9 last season and were 2-19 over the last two seasons.

Ramona’s Brandon Gansch finished with 16 carries for 131 yards and had a 19-yard pass reception.

The key for RB, however, was defense.

With Ramona desperately trying to get back in the game in the dying minutes, Jones had a sack on Ramona’s first play.

Cobian then drove his team to the RB 1. Cobian downed the ball to stop the clock and Gansch was stoned twice and the Bulldogs turned the ball over on downs