Beyond the End Zone: Double Helix 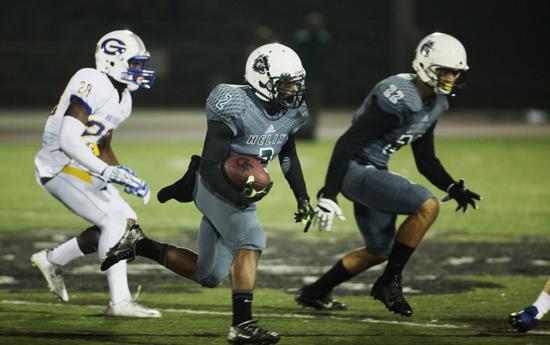 Helix running back Nathan Stinson dashes through the Grossmont defense for his second of three touchdowns Friday night. Stinson gained 170 yards on 16 carries.

Key plays: Almost all of the big plays included the name Stinson as the East County’s oldest rivalry stretched into its 63rd year. In the first quarter, Helix junior RB Nathan Stinson ran for 57- and 64-yard touchdowns and caught a 21-yard pass from quarterback Michael Austin for another score. Stinson added a 22-yard TD run in the second quarter. Austin followed with a 71-yard TD run and a 45-yard TD pass to DaShawn Keirsey to give Helix a 42-10 halftime lead.

Quotable: “That’s just hard work, doing what I have to do,” said Stinson. “We executed well.”

Title implications: The victory for No. 3 Helix (8-1, 4-0 Grossmont Hills League) over Grossmont (4-5, 1-3) set up a league championship showdown for the Highlanders next week against No. 4 El Capitan.

Quotable, too: “They’re a good team and we’re a good team,” said Austin, making sure to avoid bulletin board material for the Vaqueros. “They play well together and they’re well coached. It’s going to be a fun game.”

Key stats: Helix’s average scoring drive was 87 seconds for its six first-half TDs. Stinson rushed 16 times for 170 yards and three TDs — all in the first half — giving him 1,206 yards and 17 rushing TDs for the season.

Remember when: The last time Grossmont defeated Helix was a 28-14 victory in 1991. Grossmont head coach Tom Karlo remembers it well. He was the Foothillers starting quarterback.

Sword play: Helix assistant drum major Kyle Phillips performed the Challenge of the Sword at midfield before the game. It is a ceremony conducted hundreds of times through the years, but has lost some of its impact since Helix went to a turf field several years ago. Instead of driving the steel into the earth, the sword is now plunged into something resembling a giant pin cushion.

Six feet under: One upside of the turf field is it’s no longer possible to dig up the field with a shovel. On the eve of a game between the schools in the early 1980s, some Grossmont students came over to Helix under the cover of darkness with mischief in mind. They dug a grave at midfield and placed a headstone.

Scene and heard: This was the first football Friday night to coincide with Halloween since 2008. Scariest thing observed was Gumby cradling his head under his right arm. Realize the guy is flexible. ... Don’t want to say that a Grossmont punt was shanked with 17.3 seconds remaining in the first half, but it did land nine rows up in the stands. Seriously. “To be fair, the stands are kind of close on the visitor’s side,” said one observer. Um, OK. ... Helix punter Austin Rowley launched a third-quarter punt that had coffin corner written all over it. One problem: it bounced into an official just after hitting the Grossmont 20-yard line.

Full disclosure: This writer is a Helix graduate who never missed a home football game during his four years at the school. A lasting memory of the Grossmont-Helix rivalry was that the Foothillers didn’t have a home field at the time, so they were allowed to use the Highlanders’ field. That meant that every other year Helix students had to sit on the visitor’s side of the stadium at their own school. That didn’t sit too well with some of the students. I remember a few Highlanders — their names escape me — driving over to Grossmont High after one of the games to drop off some eggs.

Gotta eat: It seemed risky at first to purchase food from a trailer draped in cobwebs with a giant spider dangling above it. But the cinnamon and sugar pretzel (with vanilla icing) proved too tempting — and well worth the risk. It earned four belches on our five-belch scale.