If it ain’t broke, Eastlake has no reason to fix it 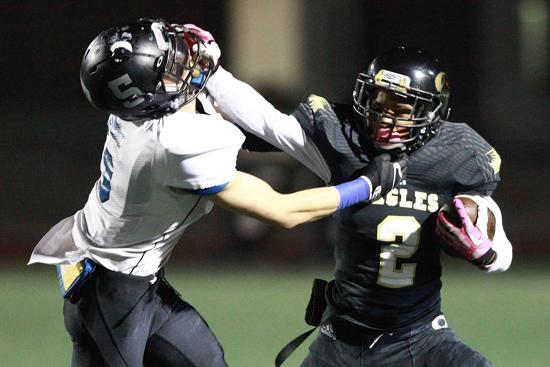 What would Price do differently?

“If I do anything different,” said Price, “and it isn’t successful, I look stupid.”

Price teaches AP physics and honors physics. A stupid man, he is not. So what McFadden’s long-time defensive coordinator has done is tinker here, dabble there but mostly follow the axiom, “If it ain’t broke, don’t fix it.”

Case in point, the Titans’ 40-20 victory Friday night at Olympian. Four plays into the game, Eastlake faced a fourth-and-2 on the hosts’ 40. What to do?

Play it safe and punt? Maybe play-action pass and go for the jugular?

Here’s what Price did. He asked quarterback Izzack Morales to slip the ball into Isaiah Strayhorn’s belly. Strayhorn busted one tackle at the line of scrimmage, then the next thing you know Strayhorn’s letting off the gas crossing the goal line, flipping the ball to an official.

Under McFadden, the Titans hugged the ground tighter than an earthworm. They are no different with Price. Eastlake ran the ball 37 times Friday, compiling 286 yards. Touchdown runs measured 40, 22, 21, 47, 1 and 54 yards. Eastlake attempted a whopping four passes, completing one.

Of Price not reinventing the wheel, McFadden said, “I think he’s pretty smart about that.”

McFadden, ever present with his red hair and straw beach hat that could shade an entire sideline, is still in the picture. He’s the freshman head coach, JV offensive coordinator and was in the press box wearing a headset Friday night.

Asked about cutting back, McFadden relayed, “No one said I was the smartest guy.”

Eastlake’s reliance on the run is a product of its talent. First there was Tony Jefferson (now a safety with the Arizona Cardinals). Then there was Aaron Baltazar. Now there’s Strayhorn.

“Not the biggest kid I’ve ever seen,” said McFadden. “But as far as being able to stop, like Barry Sanders he can stop, then all of a sudden be full speed.”

Strayhorn has watched tape of Sanders. He approves of the comparison.

“My favorite player,” he said of the Detroit Lions Hall of Famer.

“Makin’ plays, that’s what my man’s about,” teammate Milton Earles said of Strayhorn. “He keeps his legs movin’. He may be small, but he packs a punch.”

Thing is, at Eastlake, you have to keep racking up yards or the next great back is ready to replace you. For the Titans, it’s 6-foot, 190-pound junior Traylon Reed.

“We push each other,” Reed said.

Reed, in fact, insisted that when it came to identifying the fastest player on the team, it was a dead heat between him and Strayhorn.

“He knows who’s faster,” said Strayhorn. “Nothing more needs to be added. No question.”

And no question, new coach or old coach, Eastlake is still the South Bay beast.