Best Friday of the season 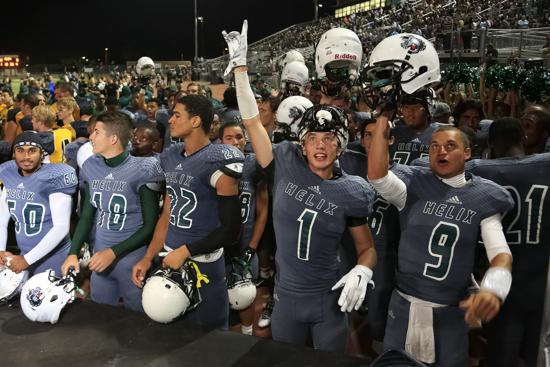 Helix Highlanders defeated Del Oro Golden Eagles in the match up for the Honor Bowl.

This is the best Friday of the high school football season.

First place is on the line in no less than eight league races. And there are at least seven arch-rival games on the schedule.

It doesn't matter where you live in the county, a good game is only a short drive away.

Here's a look at some of Friday's big games:

Grossmont Hills - The Grossmont Conference realigned this season, putting in strongest teams in this leagues and got exactly what it wanted - a first-place showdown with No. 3 Helix (8-1, 3-0) and No. 4 El Capitan (9-0, 3-0) It's offense vs. defense with El Capitan, which has scored 371 points, against Helix, which has allowed 56. This series started in 1969.

Grossmont Valley - Monte Vista (6-3, 3-0) is at West Hills (7-2, 3-0) with the league title on the line. The Grossmont Conference got exactly what it wanted, championship showdowns in two leagues.

The sportswriters use the all-league teams to help in choosing All-CIF teams. So we'd like to appeal to league reps to send all-league teams - in all sports - to Steve Brand at the San Diego Hall of Champions at steveb@sdhoc.com.

Also, I'd like to appeal to the football coaches to send a list of possible All-CIF selections to me to carry to our meeting. And don't be afraid to add stats and thoughts to your e-mail. We try our best to do a good job and be honest, but I'd like coaches to be proactive and send nominees instead of complaining afterward that we missed something. We especially need help in choosing offensive linemen. Send those nominees to john.maffei@utsandiego.com