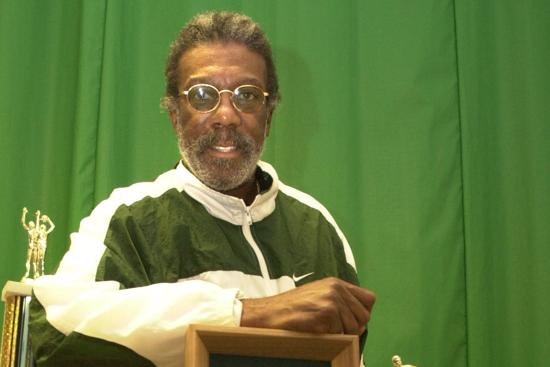 Coach Charlie Paulk guided Lincoln to a state title in boys basketball in 1994.

They called him “Coach P” and it was only with the utmost respect.

Funeral services for Charlie Paulk will be held at 1 p.m. Saturday at Bayview Baptist Church in Valencia Park with a repast and celebration of life to follow.

Paulk, who guided Lincoln High to the San Diego Section’s first boys basketball state championship in 1994, died of a heart attack on Sept. 27. He was 68.

The 6-foot-9 Paulk’s first year as the head coach of the Hornets resulted in the team advancing to the state Division IV championship, where Lincoln crushed San Anselmo Drake 63-50 behind 6-8 center Mark Sanford.

“When I think of Coach P,” Sanford said by phone from Memphis, “the thing that jumps out is his availability. He was the guy I turned to when times got hard. It was more than coaching, it was life.

“His style was not to reprimand but to teach. He was unique because he sincerely cared for us, for all of us. Whatever you needed, he’d get it for you.”

In return, Paulk’s teams played at a high level, especially that 1994 group.

“With 11 games to go we’d lost a game and he told us we were 11 games away from winning the state championship,” Sanford said. “He wrote the number 11 on the board and left it there until we won.”

From 1994-2003, Paulk’s teams won three section titles and finished second another five times. Some of his star players in addition to Sanford, who is now the player development coach for the Memphis Grizzlies, included Shaun Davis, Kenny Davis and Dominique McGuire.

Paulk, a Georgia native, was a dominant player at Northeastern State University, an NAIA school in Oklahoma. He was drafted by the Milwaukee Bucks with the No. 7 overall pick in 1968.

He was traded with Flynn Robinson to the Cincinnati Royals for Oscar Robertson in 1970 and then traded to the Chicago Bulls for Matt Guokas. His career ended in 1972 when he was traded again to the New York Knicks for a second-round draft choice.

Paulk was an alternate on the 1968 Mexico City Olympic team and had to miss the 1969-70 season when he served a tour of duty in Vietnam. The left-handed forward averaged 9.2 points and 4.7 rebounds a game after he returned from military service but was out of the league two years later.

Those planning to attend Saturday’s services are asked to confirm their attendance by calling Lynne Turner of Bayview Baptist Church at (619) 262-8384.