How to manipulate prep playoffs 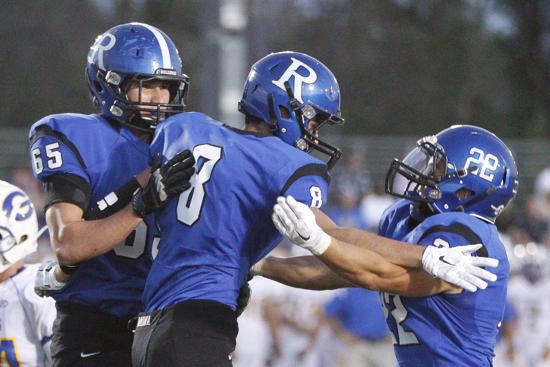 Ramona is one of 10 high school football teams that could play its way into or out of the Open Division playoffs on Friday, the final day of the regular season.

What if losing the final game of the regular season actually benefited a team’s postseason prospects?

There are 24 high school football teams in Division I. The top eight teams — as determined by the San Diego Section’s new power rankings — qualify for the Open Division playoffs. The next 12 teams in the rankings — Nos. 9 through 20 overall — will be placed in the Division I playoffs.

Finish No. 8 and your reward is a road game against the top team in the section — either Cathedral Catholic (9-1), Oceanside (9-0) or Helix (8-1) — and a likely one-and-done postseason experience.

Finish No. 9 and you receive the top seed in Division I, which brings with it a first-round bye and a home game against the winner of the game between the 16th- and 17th-ranked teams (No. 8 and No. 9 in the Division I seedings) and a much more optimistic outlook.

The football seeding committee meets Saturday morning at the Hall of Champions and playoff brackets will be released that afternoon.

Baldwin said if he had a choice he would rather be the top seed in Division I than the eighth seed in the Open.

The championship game for Division I will be played Dec. 5 at Southwestern College, with the Open Division title game at the same site the following night.

“If you go in with seed eight, you don’t get the home game, you’ve got to go on the road, you’re going to be a heavy underdog, and it’s all over,” said Baldwin. “I would rather be one (in Division I) because now I have a chance to win a championship for my school, I have a chance for two more home games, which helps the athletic department financially at the school, and my kids have a chance to keep playing.”

But that doesn’t mean giving anything less than their best effort Friday when the Bulldogs play Carlsbad.

“You’ve got to have integrity as a coach,” said Baldwin. “Especially the coaches that are in that scenario (Nos. 5 to 13). They all want to win. There’s nobody that lacks integrity. I don’t see that happening.”

But it could. It’s the unintended consequence of trying to improve on how last year’s Open Division teams were selected. In 2013, the top eight teams were determined before the season, based on each school’s five-year history. A weakness was that it did not consider that some Open schools might have a down season, which was the case with Steele Canyon (3-7) and Poway (4-6).

This year, teams must prove themselves on the field. But the way the system is set up a coach could manipulate his team’s seeding by intentionally losing — or not trying his best to win.

Cathedral (47.0 power ranking), Oceanside (46.67) and Helix (46.44) have separated themselves from everyone else in the power rankings, which consider opponents’ record and division in its calculation. The other five spots in the Open and the top four spots in Division I, which all receive first-round byes, remain up for grabs.

Mission Hills, Point Loma and Ramona are currently tied for the eighth spot.

Point Loma coach Mike Hastings said the Pointers are focused on Friday’s game against Madison and the Western League championship that goes to the winner.

“Winning a league title is at the top of our goals each year,” said Hastings. “We look at this as the start of our playoffs.

“Whatever we do this weekend will determine where we land. Where would we rather land? I don’t really care. If we land in the Open Division, I tell our kids what a great accomplishment. That’s the best of the best. ... If we’re in the Division I playoffs, then we’ve got our hands full there and have to be ready to play.

“I look at it either way as a positive.”

St. Augustine lost to Oceanside 34-28 in the season’s opening week, giving the Pirates a better game than anyone else has this season. Injuries decimated the Saints (4-5), who played one of the county’s most demanding schedules and come into the regular season finale against Lincoln hoping to even their record.

“Obviously, you compete to be the best,” said St. Augustine coach Richard Sanchez. “When we started out the season we thought we had a good chance for the Open, then the season unfolds. ...

“The competitive nature of our team definitely wants another shot at beating our rival (Cathedral, which defeated St. Augustine 57-22), so being in the Open does motivate us to do that.

Like nearly a dozen other teams, that remains to be seen.

For the first time, participants and seeding in this year’s San Diego Section football playoffs will be determined by power rankings. Playoff brackets will be released Saturday afternoon. Here are a few things to know:

• Teams ranked consecutively that have played each other will be flip-flopped to put a team that won the head-to-head matchup ahead of the team that it defeated.

• The seeding committee, which includes one current coach representing each conference, will vote to break ties in power ranking scores.

• Adjustments in seedings will be made to avoid teams from the same league meeting in the first round in the Division I to IV playoffs. This will not be the case in the Open Division and Division V, which are eight-team brackets with opening rounds that are considered quarterfinals.